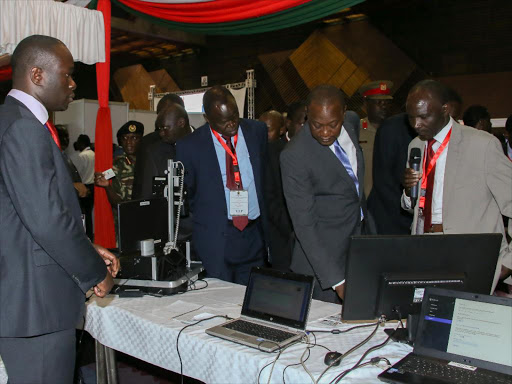 President Uhuru Kenyatta is led through the Immigration Stand by director Major General Gordon Kihalangwa, during the official launch of the Integrated Population Registration System (IPRS) at the KICC in Nairobi in 2015. /FILE

The deported self-proclaimed NRM General Miguna Miguna will have to follow due process to reclaim his Kenyan citizenship, the government has said.

The outgoing Immigration Director Gordon Kihalangwa told MPs on Wednesday that Miguna will only be granted his citizenship after applying for it afresh as provided in the new Constitution.

Kihalangwa told the committee that records in his department show that Miguna acquired the Canadian citizenship in 1988 which saw him relinquish his Kenyan citizenship after fleeing the country in 1986.

“When Miguna left this country in 1986 to Canada, there was no dual citizenship. He ceased to be a Kenyan citizen after acquiring his Canadian passport in 1988. All this time he has never reclaimed his citizenship since the new Constitution,” he said.

His remarks come barely a week after the government appealed the High Court ruling quashing the deportation of Miguna to Canada.

The state also confiscated Miguna’s passport before his deportation but the document has been deposited in the court until the case is heard and determined.

“I do not understand how he came back and operated in Kenya after relinquishing his passport. However, he has time to reapply to reclaim his citizenship through the appropriate procedure,” Kihalangwa said.

The PS nominee for Immigration, Border Control and Registration of Persons also maintained that the state did not deliberately defy the court order by blocking Siaya Senator James Orengo and businessman Jimi Wanjigi from travelling to Zimbabwe on Monday.

Kihalangwa said the duo's lawyers did not serve them with court orders in advance to allow their clients to travel for the burial of Zimbabwean opposition leader Morgan Tsvangirai.

“At 62 years of age and having spent most of my time in public service, my duty is not to go against the Constitution but serve people with respect, upholding human dignity and integrity. We remain to respect the decision of Judiciary because it is another arm of government,” he said.

The PS nominee pledged to automate crucial documents such as national IDs, NHIF cards and driving licences to ease the burden and inconvenience Kenyans have been facing in using paperwork if approved for the new docket.

Kihalangwa added that he will commission an audit within the first three months in office to establish the distribution of various tribes within his ministry to ensure it reflects the face of Kenya.

He admitted that the registration of persons by his ministry has not been done to the expectation of Kenyans but assured that audit of systems enables effective and efficient issuance of crucial documents such as national IDs and passports.

“On registration of persons, we have not done 100 per cent but I will do the audit of persons and systems. We will not do this in isolation but in collaboration with other government institutions,” Kihalangwa said.

He promised to ensure there is proper link up of Kenya’s borders through an automated system to allow the monitoring from a central place,

“Monitoring our borders from a central place would enable us to see what is happening at the Somalia border and Malaba border. I would like to have a state institution that is respected and not lingered in malpractices,” Kihalangwa said.

He defended his tenure at the Immigration department saying automation of passports and other documents has increased the revenue from Sh7 billion to Sh10.4 billion annually.

Post a comment
WATCH: The latest videos from the Star
by By SAMUEL KISIKA @KisikaSam
News
22 February 2018 - 08:00
Read The E-Paper