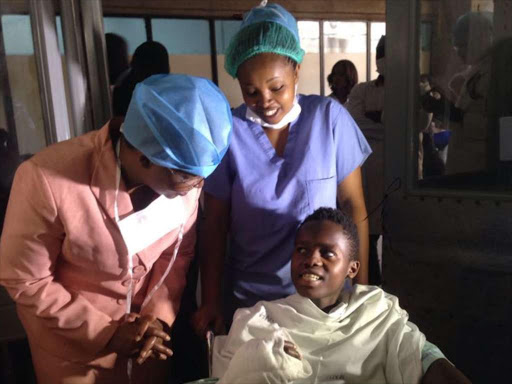 Last year Nairobi was ranked the city with the world’s second-worst traffic congestion.

And that congestion nearly made it impossible to reattach the severed hand of a 17-year-old Kiambu youth, in a groundbreaking operation.

Time was of the essence. For the best results, the severed limb should be reattached in six hours. After 10 hours the chances of success diminish greatly.

Medics who reattached the hand have described the feverish moment an

Assembling the theatre team was even more

daunting because surgeons who were out of Nairobi were

stuck in the Friday rush-hour traffic trying to make their way back.

“Ideally, we should have started early, but some doctors were still trying to beat the traffic at 5pm,” anaesthetist Leonard Orunga told the Star.

Preparations for the surgery had began early after doctors from Kiambu Hospital called KNH to inform them they had referred a patient with a severed hand. The hand was kept in a cooler box.

Theuri’s hand was severed by a chaff cutter in Kiambaa at 11am on January 26. For best results, the operation had to start by 5pm or at least by 10pm the same day.

He arrived at KNH at 1pm. Doctors determined the operation was possible because the severed hand was in good condition and the cut was clean.

“We immediately began to assemble a team of microvascular specialists,

some were out of Nairobi and arrived late because of traffic,” Dr Wanjala Nang’ole said.

He led the surgery together with Prof Stanley Khainga, both of the University of Nairobi’s College of Health Sciences.

“If the body part was mangled, then it would be very difficult,” Nang’ole said. KNH is the only hospital with a microvascular team for such an operation.

Microvascular surgery refers to the use of an operating microscope in surgery and is often performed when a patient suffers from a detached body part, such as limbs and even genitalia.

Prior to this, partial limb reattachments have been performed at KNH, but never a successful full reattachment of a completely severed limb. The medics always believed they were capable of such a task, but no opportunity had presented itself.

As the theatre team assembled, Theuri’s parents were asked to give their consent for the surgery.

Nang’ole and those present proceeded with tests such as determining the volume of red blood cells. They also conducted blood grouping and cross-matching and tested renal function.

Finally, a multidisciplinary theatre team of 15 was ready. The operation began at 10pm. “Two teams were constituted with one team preparing the hand and the other team working on the stump. This was very important to save on time,” Nang’ole explains.

The surgeons first identified blood vessels, nerves and tendons. They then trimmed the bones on both ends to allow realignment.

After joining the bones with screws, they repaired the arteries and veins. Finally, they also identified the tendons, which allow movement of the hand and repaired them.

Three hours after the hand was reattached, the medics pricked Theuri’s thumb with a needle. It bled. “This was a good sign the blood had started to flow,” Nang’ole says. The entire operation ended the following day at 6am.

Theuri can now move his fingers. However, the tendons will take about two months to heal completely. Nerves take four to five months. But he will be discharged in about 10 days and will undergo physiotherapy until the hand is completely healed and flexible.

Prof Khainga says he will regain 80 to 90 per cent of the hand’s functions. But

he will not have a flexible wrist joint because some of the bones that allow for movement were destroyed in the accident. The NHIF will pay for the operation, whose cost is about Sh1.4 million.

Prof Khainga explains Theuri will not be put on life-long drugs, because there is no risk that his body could reject the reattached hand.“We are out of the most critical period,” he says.