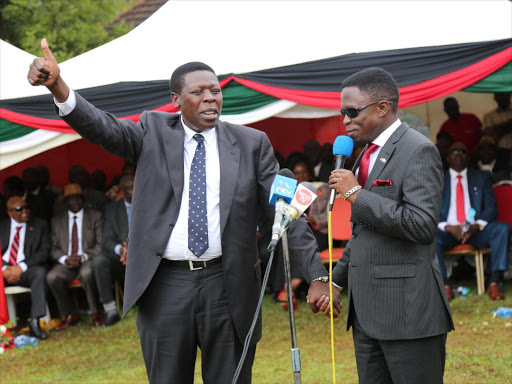 Eugene Wamalwa and Ababu Namwamba at Milimani on August 23.Yvonne will be buried at Milimani/NICHOLAS WAMALWA

The family of the late Yvonne Wamalwa has asked leaders to avoid politics during her burial on Saturday.

Khaemba said the family has sent a request to those who will attend the burial not to politicise the ceremony.

The mass and burial of late vice president’s wife will be done at their home in Milimani and not at the Kitale showground as earlier anticipated.

“This time we have changed the mass will be conducted at the Milimani compound where we have enough space and all mourners should gather by 9 am,”

Leaders on Thursday described Yvonne a hardworking, focused, intelligent, caring and very giving, as they eulogized her.

“She was a friend and a servant of the people,” former Prime Minister Raila Odinga said.

Yvonne's requiem mass was held at the Consolata Shrine, with government officials, politicians, the clergy, civil society, diplomats and other Kenyans in attendance.

They described the diplomat as an aunt, a friend, a mother, a sister, a colleague and a daughter.

President Uhuru Kenyatta and his political rival Raila Odinga are expected to meet at the funeral for the first time since Odinga was sworn in on Tuesday as the People’s president.