Why Raila's swearing-in violates the Constitution 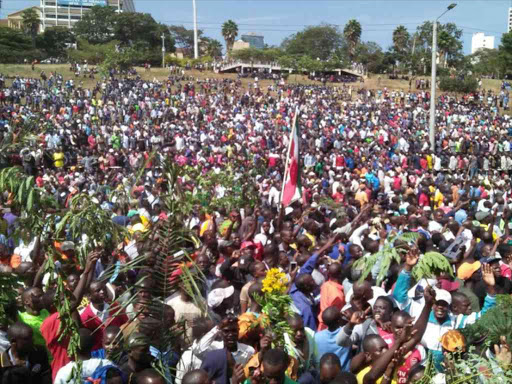 NASA leader Raila Odinga swearing-in at Uhuru Park has violated various aspects of the Constitution despite the opposition leader proclaiming that it is in accordance with the law.

"We assure everyone else that everything will be in accordance with the law," Raila told KTN News during their lunch hour bulletin.

However, the swearing-in of Raila violates various sections of the Constitution that opposition says it is following.

Other than the swearing-in not happening by the stipulated 2 pm, the Chief Justice who must be present is not among those at Uhuru Park.

Article 141 of the Constitution that was promulgated in 2010 stipulates how a President assumes office in Kenya.

It adds in section 2 that the President-elect shall be sworn in on the first Tuesday following - "(a) the fourteenth day after the date of the declaration of the result of the presidential election if no petition has been filed under Article 140."

In case there is a presidential petition, the president-elect is sworn in on the

seventh day following the date on which the court renders a decision declaring the election to be valid.

The said Article also requires that Parliament passed legislation providing for the procedure and ceremony for the swearing-in of a President-elect.

This law is the Assumption of the Office of President Act, 2012.

Section 12 of the Act says that the swearing in of the President-elect shall be conducted in a public ceremony held in the capital city.

day on which the President-elect is sworn in shall be a public holiday.

"Upon signing the certificate of an inauguration, the outgoing President shall hand over to the President the following instruments of power and authority —

This provision, however, does not apply where the incumbent is re-elected into office.

Section 16 requires that the President shall, upon the swearing in of the Deputy President-elect, give an inauguration speech to the nation.