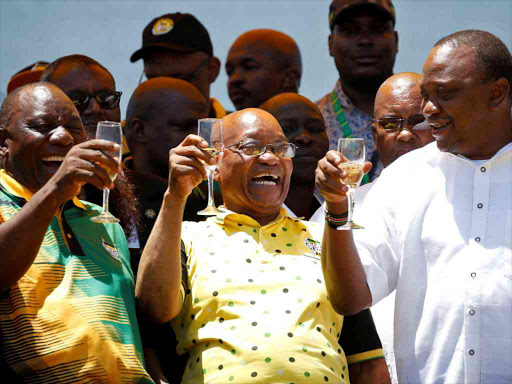 South Africa wants to attract foreign investors to help it kick-start economic growth and eradicate poverty and will crack down on corruption, the new leader of the ruling African National Congress said on Saturday.

Cyril Ramaphosa, who won the tight race to succeed President Jacob Zuma as ANC leader last month, also said that he would make fighting corruption a priority in a speech to mark 106 years since the founding of Africa's oldest liberation movement.

South Africa's economy has slowed to a near-standstill during Zuma's two presidential terms, as allegations of influence-peddling in government and mismanagement of state-owned enterprises have dented consumer and business confidence.

But Ramaphosa's election win has injected a sense of optimism that the ANC, which has governed South Africa since the end of apartheid in 1994, could win back the trust of voters and investors disillusioned with Zuma's rule.

"South Africa is open for investment and we invite all investors from all over the world to come to South Africa to invest in our country so that we can grow our economy, create jobs, end poverty," Ramaphosa told tens of thousands of cheering ANC members in a stadium in the Eastern Cape province.

"We must have an economy that offers policy certainty and addresses areas that inhibit investment, growth as well as social inclusion," said Ramaphosa, 65, a former trade union leader and one of the country's wealthiest businessmen.

There has been widespread speculation that Ramaphosa and his allies are lobbying ANC members to oust Zuma as head of state in the coming weeks, but he made no mention of Zuma's future.

Zuma sat alongside Kenyan President Uhuru Kenyatta to hear Ramaphosa speak and was booed by some sections of the crowd when he entered the stadium.

Zuma's second presidential term doesn't officially end until 2019 when national elections will be held, but he could be removed early through a motion of no confidence in parliament or at a meeting of the ANC's national executive committee.

Ramaphosa said on Saturday that a judicial inquiry into allegations of influence-peddling in Zuma's government was a top priority and that those responsible should be prosecuted.

Zuma has denied allegations that he has allowed his friends to influence the appointment of cabinet ministers.

Ramaphosa's message resonated with ANC member Vanita Kok, 49, from the Khoi San royal house. She said: "Corruption is rife and I hope he sorts it out."