Kalenjin elders rule out superstition as cause of Salgaa accidents 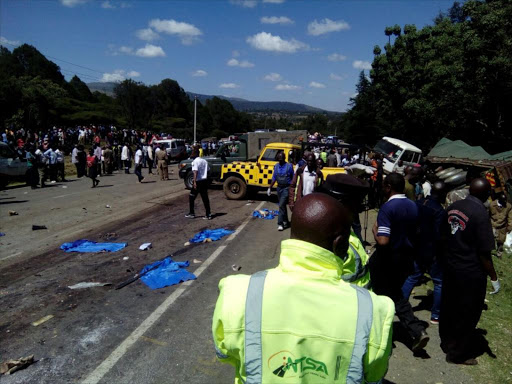 Kalenjin elders on Wednesday said the deadly accidents along the Salgaa-Sachangwan-Mau summit road are caused by carelessness and not superstition.

The elders said this after a consultative meeting that brought together elders from Nakuru, Baringo, Kericho and Bomet.

outside AGC Sachangwan where they held the meeting.

said they will hold a

where over 200 people died in

The elders ruled out the possibility of relocating Sachang’wan fire tragedy victim’s mass grave that has been allegedly linked to a spate of accidents along the Kibunja- Salgaa stretch.

The elders said they were still holding consultations over the myth that three cursed Nandi chiefs who died near Sachangwan are the cause of accidents.

The meeting was convened by nominated MCA Rachel Maru, who says in the past five years, she has assisted witnessed

more than 45 accidents in the area.