Education: All that parents need to know ahead of 2018 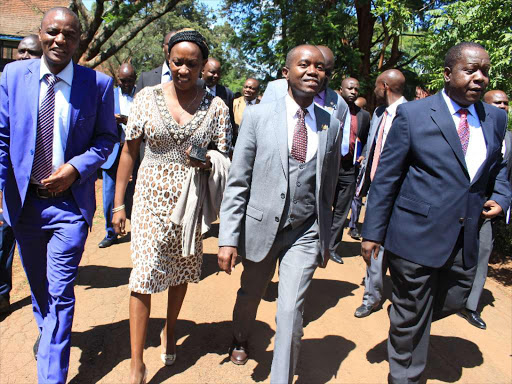 2018 will be a make-or-break year for Kenya's highly rated education system as the government begins to implement a raft of radical changes that include transiting to a new education model.

The government will also be rolling out a key Jubilee Party election pledge — free day secondary education — to achieve 100 per cent transition for all learners from Standard 8 to Form 1 that has many parents excited and anxious at the same time.

Another radical shift is the decision by the ministry to supply textbooks directly to the schools.

The mass transition means that schools will be forced to admit everyone who sat the KCPE, including traditionally rejected “failures” who scored inadmissible marks.

The test will begin on January 9, when Form 1s report to school.

Many public schools lack adequate infrastructure like classrooms and washrooms and the strain of the mass intake is expected to extend to accommodation facilities and teachers.

Unions and educationists have argued that there aren’t enough classrooms and that the number of teachers is way below the required international standard of teacher-to-learner ratio. The current Pupil-Teacher Ratio in public primary schools is 56:1 against the recommended PTR in Kenya of 40:1. In public secondary schools the Student-Teacher Ratio (STR) stands at 41.1.

Public primary schools are reeling from a deficit of 39,913 while secondary ones are short of 47,576 teachers.

The government has promised to hire 50,000 teachers in the next four years to plug the shortage in secondary schools in view of the expected trebling of enrollment.

“We are going to singularly focus on the teacher-student ratio, especially for secondary education,” Education CS Fred Matiang’i said.

“We are also exploring new ways of supporting principals and school boards so that they can acquire more teachers. We will seek your suggestions on whatever proposals we come up with,” he said when he launched the Form 1 selection at the Kenya Institute of Curriculum Development (KICD).

The Teachers’ Service Commission (TSC) has asked for 12,696 teachers to be recruited annually for the next four years in addition to the 5,000 it hires every year.

It estimates that the recruitment will cost the government Sh8.3 billion annually, with the total cost coming to Sh33.2 billion over the four years.

The Treasury is expected to prepare the Supplementary Budget, which will be tabled in Parliament when it resumes sittings in February, to provide for additional funds to employ teachers. This comes even as the government plans to retrench nearly 40,000 from the public service beginning February.

However, as schools reopen for the first term of the 2018 academic year on Tuesday, the government is keen on kicking off the ambitious 2-6-6-3 system that will replace the current 8-4-4 one.

The plan has received stiff opposition from the Kenya National Union of Teachers (Knut), which wants the rollout pushed to 2019 to allow proper equipping of teachers.

But in what now signifies the government’s resolve to implement the new system, the KICD has already trained over 160,000 personnel expected to start implementing the new curriculum from Tuesday.

The rollout follows a successful pilot phase that targeted 10 schools per county, which reported positive feedback.

KICD, the state’s curriculum implementation agency, rolled out capacity training for all pre-primary and primary level educators ahead of the implementation.

The training was pushed closer to the opening dates because the very teachers targeted were also involved in teaching learners in schools under the 8-4-4 system.

WHAT YOU NEED TO KNOW

The KICD has already reviewed and approved books for the new curriculum, which has been hailed by educationists as the panacea for the country’s unemployment crisis.

However, parents face a dilemma, as the new books for the new system are yet to hit the shelves just days before schools reopen.

For secondary schools, the ministry of Education has adopted a radical book distribution policy that will see the government issue every student reporting for Form 1 with standardised textbooks.

The student will get six textbooks — one each for Mathematics, Kiswahili, English, Chemistry, Physics and Biology. The books will bear the Coat of Arms on the cover.

Publishers who are supposed to produce books for Classes 1-3 under the new curriculum as well as those for Class 7 and 8 and Form 1-4 under government procurement have raised the red flag.

With three days left before opening, the Kenya Publishers’ Association Chairman, Lawrence Njagi, said they would require two weeks to deliver the books.

“We are already publishing the books. We have six textbooks for each subject,” he said.

“However, we have some subjects that only managed to get two publishers and that means we will have to resubmit their bids, which may take time,” Njagi said.

The new 2-6-6-3 system is meant to address evident gaps in the country’s practical-oriented 8-4-4 system that replaced the colonially-inclined theoretical education system of 7-4-2-3.

The introduction of the much-discredited 8-4-4 system in 1985 was meant to impart practical skills in learners. However, this spirit got lost along the way, leading to the beginning of yet another module.

Now the new system offers a broad range of subjects at upper primary and junior secondary and is aligned to the country’s development blueprint, the Kenya Vision 2030.

Overall, the new system has three tiers: Early years consisting of Pre-primary One to Grade Three; middle-school comprising Grades Four to Nine; and senior school running from Grade 10 to 12.

Digital literacy and pertinent and contemporary issues will be integrated across all subjects.

At Lower Primary, the learners from Pre-primary 2 will join in Grade 1 at about 6 years of age and spend 3 years before progressing to middle school at the end of Grade 3.

ICT will be a learning tool in all areas with Pertinent and Contemporary Issues mainstreamed in all subjects.

Upper primary is part of middle school and comprises three years where learners are exposed to a broad curriculum and given an opportunity for exploration and experimentation.

Lower secondary will expose the learner to a broad-based curriculum to enable them to explore their own abilities, personality and potential as a basis for choosing subjects according to career paths of interest at the senior school.

The subjects are in two categories; core and optional. At this level, a broad-based curriculum is offered to enable the learner to explore their own interests and potential as a basis for choosing subjects according to career paths of interest at senior level.

Learners will be required to take the 12 core subjects provided: They include English, Kiswahili or Kenyan Sign Language (for learners who are deaf), Mathematics, Integrated Science, Health Education, Pre-Technical and Pre-Career Education, and Social Studies.

Learners are provided with an opportunity to choose a minimum of one and a maximum of two subjects according to personality, abilities, interests and career choices from the list provided. The optional subjects include: Visual Arts, Performing Arts, Home Science, Computer Science, Kenyan Sign Language, Indigenous Languages and Foreign Languages, among them German, French, Mandarin and Arabic.

Three years for learners aged15 to 17 years. Lays the foundation for further education and training at the tertiary level and the work world. It marks the end of Basic Education as defined in the Education Act, 2013.

Learners exiting at this level are expected to be “empowered, engaged and ethical citizens”, ready to participate in the socio-economic development of the nation.

The learner entering this level shall have had opportunities at lower secondary to explore their own potential, interests and personality and is therefore ready to begin specialisation in a career path of choice. They could pursue studies in one of the three pathways available in senior school: Arts and Sports Science, Social Sciences or Science, Technical Engineering and Mathematics (STEM).

Within the three pathways there are various tracks. Schools can also decide to offer one or more tracks in the pathway, depending on the ability to acquire the infrastructure necessary for acquisition of the identified competencies.

Under the Arts and Sports Science there are three tracks: Sports, Performing Arts and Visual Arts

Social Sciences have Languages and Literature, and Humanities and Business Studies.