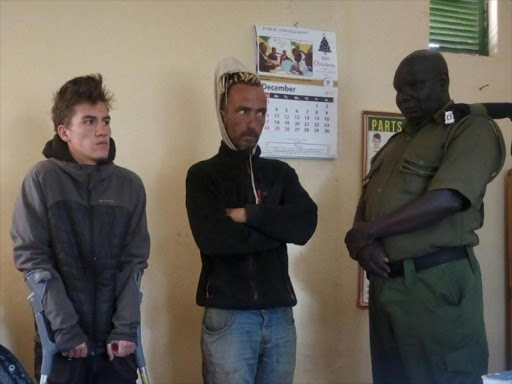 Frenchmen Tllie Ayun and Rondel Florent at Iten police station after they were found with bhang, Friday December 22, 2017. /STEPHEN RUTTO

Police in Iten, Elgeyo Marakwet county are holding two French nationals found in possession of bhang of unknown value in a hotel.

Rondel Florent, 43, and Tllie Ayun, 19, who identified themselves as athletes, were apprehended on Thursday evening at Kilima Resort near Kamariny stadium.

Keiyo North police boss Mwenda Meme on Saturday said they received a tip-off from members of the public who discovered the two had the banned substances.

He said police raided the hotel and interrogated the two men who turned violent during questioning, prompting a search.

"They were interrogated and could not explain what they were doing in the hotel. Police officers searched them and recovered bhang in their pockets," Meme said.

"When our officers arrived they found the suspects smoking illegal substance outside the hotel. The Frenchmen turned violent."

Meme said it said foreign drug peddlers may be visiting the high altitude training area in the pretext of training athletes only to engage in illegal trade.

"Criminals look for areas where they can not be suspected. They mix with athletes, making it difficult to detect them," he added.

He urged residents to inform the police when they spot foreigners exhibiting suspicious behaviours.

The police boss further called on locals to monitor their children to stop them from accessing illicit substances from drug peddlers.

He said investigations will establish whether the two suspects are athletes as they claimed, or drug peddlers posing as sportsmen.

The arrest came three weeks after parents raised concern over raising cases of bhang smoking among teenagers in Iten.