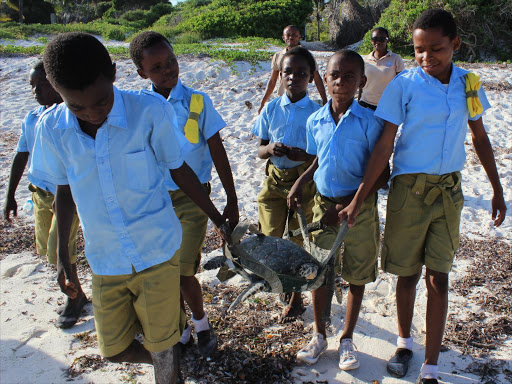 Kai, a three-year-old green sea turtle, was released back into the turquoise waters of the Indian Ocean off

She had been hospitalised after her guts were blocked with white plastic bags she swallowed, mistaking them for jellyfish, and tiny plastic pieces entangled in the sea grass she eats.

In a bid to clean up Kai's environment, the villagers of Watamu, who depend on fishing and tourism, joined hands in 2016 with an entrepreneur and a local ocean conservation charity to recycle plastic waste from two marine national parks in easternKenya.

Villagers in Watamu, including school children, gather plastic waste from the sea, beaches and households every Friday, a holy day for the Muslim-majority community here.

The poorer among them sell the plastic to Ngaruiya’s company, Regeneration Environmental Services Ltd.

At Watamu’s Blue Lagoon Bay, Gilbert Risiki Ngonyo told the Thomson Reuters Foundation he supplements his irregular earnings from small carpentry and painting jobs with about 3,000

Kenyan shillings ($29.15) a month from selling the salvaged plastic.

In four hours, collectors can gather 50 kg of plastic, earning 500 shillings ($4.86) - “enough to eat and feed their family for a day”, said Ngaruiya.

Locals, many of them women – who work faster than men, according to Ngaruiya - segregate the plastic materials into eight types.

After being machine-chopped into 1-cm flakes, the plastic is washed and dried, before additives like hardeners and sun-blockers are mixed in.

The plastic is heated to melting point to avoid noxious fumes. Then locally sourced river sand, gravel, fibre-glass, sawdust or coconut fibres are added to the hot liquid, and it is poured into moulds to set.

“Basically we are substituting plastic for cement,” said Ngaruiya, a U.S.-trained bio-engineer. Melted plastic absorbs sand, squeezing it as it cools, to become compact and strong, he explained.

“These recycled plastic products can last 200 years,” he said. The negative aspect of plastic waste – that it does not deteriorate or decompose for hundreds of years - becomes a positive when converted into construction materials, he added.

National Bureau of Statistics, the tourism industry suffered from 2011 to 2015, with coastal marine parks hit the hardest. Visitors to Kilifi County’s Watamu marine park fell by 35 percent, while that in Malindi saw about 40 percent fewer.

The government attributes the drop to security concerns caused by attacks linked to Islamist groups.

Ben Kithiy, a 24-year-old currency changer in Watamu who makes a living from European and American tourists visiting the fine white sand beaches to snorkel, water ski and windsurf, can think of another reason.

“Floating plastic pieces sticking to the body when you are swimming in these waters makes for a very unpleasant experience,” he said. Even local children who come to clean up the beaches don’t want to swim for that reason, he added.

Every year, between 4.8 million and 12.7 million tonnes of plastic are dumped in the world’s oceans, depending on river flooding, costing some $8 billion, according to a 2017 report from UN Environment.

Kithiy found five foul-smelling dead turtles on his local beach in Blue Lagoon Bay last year. Several others were floating inertly in shallow waters after eating plastic, and would likely have starved to death, he said.

Casper Van De Geer, who manages the Watamu Turtle Watch conservation programme, said that of the 30 to 80 turtles brought in for rehabilitation each year, 15 percent are harmed by plastic.

“Close to half of them die of infection as pieces of hard plastic lodge into nooks and crannies inside the intestine, lacerating it and causing infection,” he said.

Since starting production in 2016, Ngaruiya’s factory has recycled 40 to 50 tonnes of plastic waste gathered from Watamu and Malindi. It has a daily capacity of 2 tonnes, but regular orders for recycled materials are yet to come in, despite products being competitively priced, the entrepreneur said.

Kenyabanned single-use plastic bags earlier this year, conscious of their devastating impact on wildlife, Ngaruiya’s business has received no financial incentives or subsidies from the government, banks or other funding agencies.

Ngaruiya’s business has provided the missing link in building a circular economy for plastic, she added.

Ngaruiya said greater awareness is needed at the consumer level. “It’s time to take personal responsibility with one’s own waste, to separate the organics from the plastics, and ensure they reach the recycling centres,” he said. More such centres are needed along the African coast, with smaller factories alongside, he added.

At the UN Environment Assembly in Nairobi this month, 193 member countries resolved to prevent and significantly reduce marine pollution of all kinds by 2030.

About 40 countries have signed up to a “Clean Seas” campaign launched by UN Environment in January 2017 to introduce government policies for industry to minimise plastic packaging and redesign products, while urging consumers to change their throwaway habits before irreversible damage is done to oceans. ($1 = 102.9000Kenyan shillings)

Post a comment
WATCH: The latest videos from the Star
by THOMSON REUTERS FOUNDATION
News
21 December 2017 - 09:00
Read The E-Paper