Shebesh rebukes Akombe, claims she worked for NASA or 'outside forces' 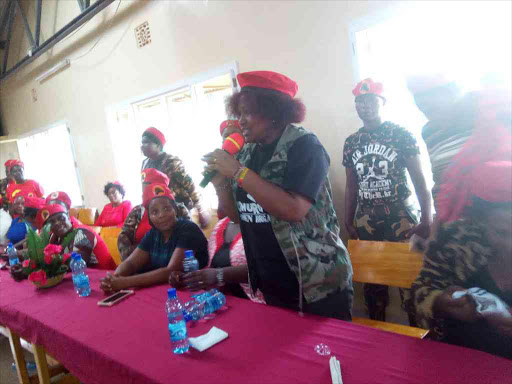 A section of Jubilee leaders have criticised Roselyne Akombe for resigning as IEBC commissioner, alleging

that she was working for NASA.

Several politicians have torn into Akombe for quitting, claiming she was an Opposition mole, but she denied these claims in an interview with

"She [Akombe] should stop being hypocritical and tell us if she was working for NASA or some outside forces," Shebesh said.

The politician said she had a conversation with Akombe after the Supreme Court ruling that saw President Uhuru Kenyatta'S re-election nullified.

She said Akombe told her she did not have faith in the electoral system.

"I told her if she doesn't trust the system she should resign and pave way for appointment of another commissioner on time," she said

during a Jubilee delegation's tour of Kitale on Thursday.

The politicians said next week's repeat poll will proceed despite Akombe's resignation.

Trans Nzoia woman representative Janet Nangabo said that in case of violence after October 26, Akombe should be one of the people to be arrested.

"With or without Akombe we are going to the ballot on October 26," he said.

Akombe fled for her life to New York, eight days before the presidential rerun.

She resigned, saying the October 26 repeat presidential polls "absolutely" cannot be credible as they're being organised by a very "divided commission".

Akombe told the BBC in an interview from New York that she personally had received death threats, as had her brother, who already has fled Kenya.

She said one message to her brother said, "Tell your sister, to stop asking too many questions and relax or she will be Msando'd." This referred to the torture-murder of former ICT manager Chris Msando in late July.

Post a comment
WATCH: The latest videos from the Star
by corazon [email protected]
News
19 October 2017 - 12:00
Read The E-Paper