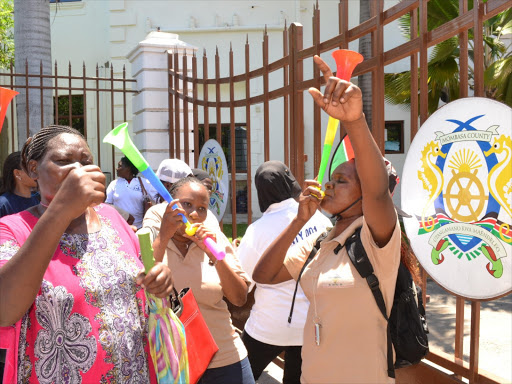 Some of the striking Mombasa county nurses during a demonstration before a meeting with Governor Hassan Joho, October 4, 2017. /ELKANA JACOB

meeting between nurses’ union officials and Mombasa government officials did not reach an agreement.

After hours behind closed doors with Governor Hassan Joho and DG William Kingi,

the nursers said their strike, which began on June 5, will continue.

They had demonstrated before meeting the county heads, led by Kenya National Union of Nurses acting national chair Joseph Ngwasi.

"The strike is still on," they said as they walked out of the venue.

Ngwasi said they tasked Joho with talking to his colleagues in all 47 counties, regarding addressing all their concerns so they can end the industrial action.

"We have realised there is a very big gap between the nurses’ union and the national and county governments," Ngwasi said.

"We are now calling for a round-table meeting to resolve pending issues before we can think about a return-to-work formula."

But Ngwasi said the signing of their Collective Bargaining Agreement is their irreducible minimum.

"The only issue we want addressed now is the CBA. We cannot be coerced to return to work without this issue being addressed.

Our strike is not controlled by a button which can be switched on and off at people's pleasure,"

he said outside Joho's office.

Kingi termed the meeting fruitful, saying the Governor promised to talk to his colleagues.

"You have tasked him with talking to other governors. We are now requesting you to give us time to engage them so we can come up with a solution."

Joho flew to Nairobi on Wednesday afternoon after the meeting with the nurses.

"The Governor is going to sit with the others. We are happy the nurses have reduced their demands to only three and are certain a solution will be reached."

Clinical officers, who had joined nurses in the strike, signed a deal with Health CS Cleopa Mailu and the Council of Governors earlier today.

CoG chairman Josphat Nanok asked nurses to head the government's plea for them to return to work.