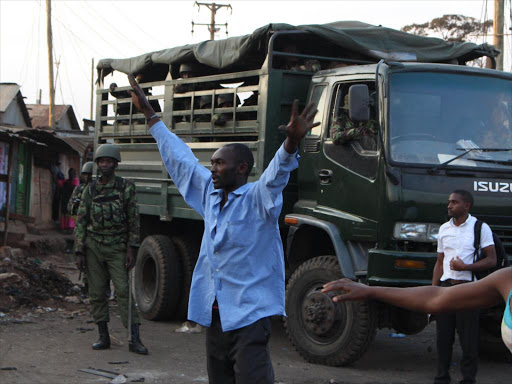 A police officer looks on as Nasa supporters in Kawangware 56 demonstrate in support of Presidential candidate Raila Odinga claiming he had won the election on the evening of Thursday, August 11. /COLLINS KWEYU

Amnesty International has expressed concern over the killing of protesters following

post-poll chaos in Kenya and called on the police oversight authority to probe the killings.

Police on standby moved in to control demonstrators who took to the streets to protest the outcome of presidential elections on Friday night but reports said they shot dead some of the demonstrators.

Most of the killings, including that of a ten year old, have been reported in opposition strongholds

“The Independent Policing and Oversight Authority (IPOA) must immediately launch an independent and effective investigation into reported killings and where there is credible evidence of crimes, those responsible must be brought to justice,” said Muthoni Wanyeki, AI's Regional Director for East Africa, the Horn and the Great Lakes.

IPOA is mandated with the investigation and prosecution of police officers involved in alleged acts of human rights violations in the course of their duty.

On Saturday, the Kenya National Commission on Human Rights said 24 people had died in the hands of police since the day Kenya went to the polls on August 8.

NASA said the death toll stood at over 100 people "whose bodies were then stashed in gunny bags" to conceal the crime.

In a press statement posted on the human rights' website, Wanyeki said:

“Everyone has a right to peaceful protest and they must not be hurt, injured or killed for exercising that right.”

avoided at all costs.

Articles 37 and 38 of the Kenyan Constitution grants permission for public picketing and demonstration.

Wanyeki said they have credible information that three men were shot dead by police in Kibra slums and Kondele in Kisumu.

She said that confrontations

between police and protesters had also been reported in Nairobi's

However, the Kenyan government denies that the police are using disproportionate force against demonstrators.

Acting Interior CS Fred Matiangi said on Saturday the government was not aware of anyone who had been killed by police during demonstrations.

He refuted claims that anti-riot police were using live ammunition against unarmed civilians exercising their constitutional right to demonstrate.

"We have seen in the past police escorting demonstrators on the streets of Nairobi. The government has no intention to kill its people," Matiang'i said at a press conference in Nairobi.