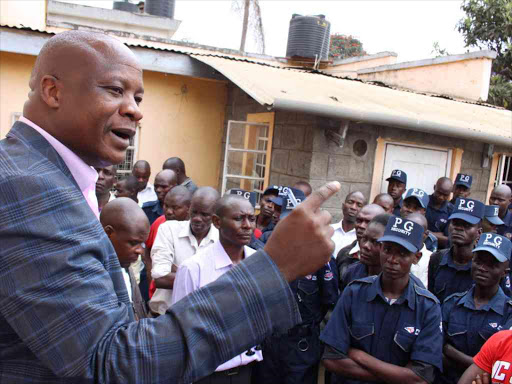 Private security workers have threatened to sue and down tools since their salaries have not been increased by 18 per cent as the President directed in May.

During Labour Day celebrations on May 1, President Uhuru Kenyatta increased the minimum wage bill for all workers by 18 per cent to cushion them against rising inflation.

said most security firms have defied the directive.

“We are telling those who have not adhered to the presidential decree on minimum wage, more specifically the 18 per cent increment, that we will declare war on them. We will go to court and even withdraw services,” Andabwa said.

Addressing a press conference in Nairobi on Wednesday, he noted they have already issued KK Security

“On August 14, we will withdraw services of private security officers and demand what the President gave us. We will not leave even a cent to the employer...they must pay," he said.

"We cannot negotiate minimum wage. It is not a CBA."

Doctors, nurses and teachers have gone on strike before over Collective Bargaining Agreements for hgher pay and improved working conditions.

Doctors and teachers' protests were successful but nurses are still pushing for their demands.

The private guards also slammed IG Joseph Boinnet for declining to respond to their request to help police maintain security during elections.

Andabwa said they wrote to the IG in May seeking to partner with security agencies.

“I wrote a letter to the IG telling him we are more than police," he said, noting they number about 500,000

across the country and that their contributio cannot be wished away.

“But I appeal to all our members, that even if the IG declines to respond to us, let's help police maintain peace by informing them of suspicious groups. We do not want to see chaos during elections."