You are not a god, billboards will not vote for you, Marwa tell Joho 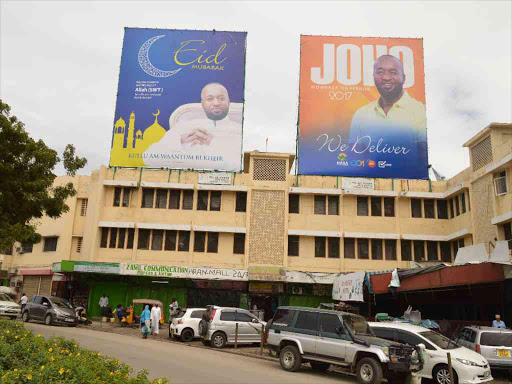 Hassan Joho should stop chest-thumping as if he is a god and realise billboards will not vote for him, Nelson Marwa has said.

Marwa, who is Coast regional coordinator, rapped the ODM Mombasa Governor on Thursday over his billboards row with rivals.

This directly translates to: "He is chest-thumping and measuring the amount of air we breathe. Is he the God who determines that?"

Joho sued Nyali MP Hezron Awiti for mounting a billboard without permission from the county government. Awiti is expected to take a plea on Friday.

Marwa said everyone has the constitutional right to put up billboards wherever they want provided procedures are followed.

He said Joho's have been splashed all over the county yet he has asked advertising companies not to put up those of his opponents.

The regional coordinator noted that in

Kwale,Taita Taveta and Kilifi, there are billboards of candidates regardless of their parties, but that Mombasa seems to be a special place for the incumbent.

“What is so special about Mombasa such that others cannot put up billboards? His billboards are all over...from the airport to the town center," he said.

“'Does he think citizens will eat billboards? Let him unmount them and feed them to wananchi."

Marwa said the county chief he has clashed with on several matters should focus on vote hunting.

He told politicians in Mombasa to put up their signs and

dared the county inspectorate and "their master" to remove them.

“Place your billboards wherever you want even if you are an MCA or governor aspirant. Let them take them down,” he said.

County transport CEC Tawfiq Balala said there is a process to be followed before a billboard is erected.

He said anyone who wants to have signs erected should liaise with advertising companies to get the right procedures.

The CEC said the county government has been using the courts to intimidate the Governor's opponents and their supporters.

He claimed they have paid even the magistrate for rulings in their favour.

“That court should be careful or I am going to invade it with a special unit and shut it down."

Post a comment
WATCH: The latest videos from the Star
by MALEMBA MKONGO @malemba_mkongo
News
29 June 2017 - 15:00
Read The E-Paper