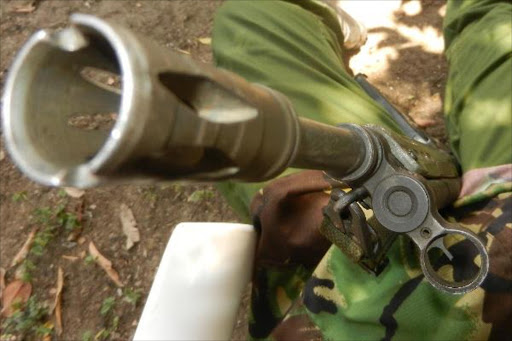 The officer shot himself with his G3 rifle while on night patrol duty with a colleague. /FILE

The officer shot himself with his G3 rifle while on night patrol duty with a colleague.

"After a brief chat, the victim remained in his bed as the other officer went out to take some water. Some minutes later, there was a gun shot and when the colleague went to check he found the officer lying in a pool of blood," Kilifi AP boss Elisha Ng'etich said.

"He had a gunshot would at the left side of his chest," he said, adding that investigations are underway.

Ng’etich declined to give the name of the deceased, saying the next of kin is yet to be informed of the incident.

"The deceased was together with a colleague at the camp and was jovial all day. He did not show any worrying signs," he added.

He said they do not know why the officer killed himself but said they suspect it may be in relation to a family dispute.

"This is because the officer did not have any problems at work and even minutes before the incident, he had chatted freely with other officers at the camp,” said Ngetich.

The body has been taken to Kilifi county hospital mortuary.