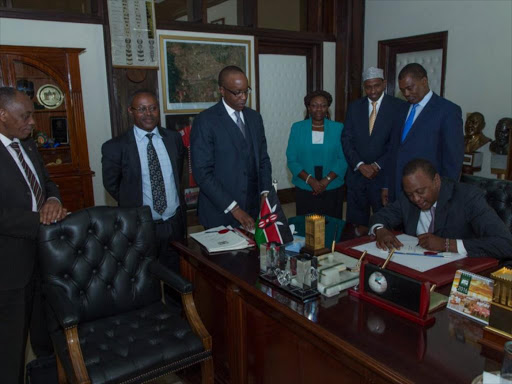 Finance Bill 2017 and eight others into law.

On June 13, Uhuru refused to sign the Bill and

recommended that betting, lotteries and gaming activities should be taxed at the rate of 35 per cent.

after Parliament deleted a clause designed to discourage youth from engaging in betting.

The law raises the tax rate on gambling but sets it at a lower rate than had originally been proposed.

It will impose a tax of 35 per cent of gross profits on all gambling.

Until now, lotteries were taxed at five percent, betting firms - bookmakers - at 7.5 per cent, casino gambling at 12 per cent and competitions like raffles at 15 percent.

Treasury CS Henry Rotich had originally proposed raising the tax rate to 50 per cent, saying the rapid growth of on-line gambling hurt the young and vulnerable, and the proceeds from the tax would fund sports, culture and the arts.

The other Bills Uhuru signed on Wednesday

include Division of Revenue Bill 2017,

The Division of Revenue Act seeks to provide for equitable provision of revenue raised between the national and county governments in 2017/18 financial year.

The national government's share is Sh1.2 trillion while the county's allocation is Sh345 billion, an equivalent of 36.95 per cent.

The conditional allocation is for leasing medical equipment, level five hospitals, construction of county headquarters and rehabilitation of youth polytechnics.

Supplementary Appropriation Act seeks to authorise the issuance of certain sums of money out of the Consolidated Fund and their application to services for the year ending June 30.

to harmonise the provision following recent amendments to the Act.

It particularly seeks to amend section 41 of the

Insurance Act to prescribe assets that shall not be included for purposes of determining an insurer’s capital adequacy.

It also seeks to amend the Act to define what admitted liabilities are, a term which Insurance Act had not defined.

This will help in regulating healthcare services, their providers, products and technologies.

Thelaw seeks to define how national health policy shall be formulated, implemented and coordinated between the two levels of government.

It seeks to achieve the establishment of a national health system which will progressively realise the right to the highest attainable standard of health, including the right to healthcare services and reproductive health.

provides for the registration of hydrologists. It establishes a Hydrologist Registration Board which will be responsible for matters including regulating, coordinating and overseeing the practise of hydrology.

The law prescribes the qualifications for registration as a hydrologist and licensing of a person wishing to practise. It

also provides for restrictions on use of titles by non-registered persons.

The Clinical Officers Act provides for the training, registration and licensing of clinical officers.

It establishes the Clinical Officers Council of Kenya which shall be responsible for advising the government on policy matters relating to clinical medicine practise among other things.

The Basic Education Amendment Act amends basic education Act. It charges the government with the provision of free, sufficient and quality sanitary towels to every girl child registered and enrolled in a basic public

education institution and has reached puberty.

The law says the government will provide a safe and environmental sound mechanism for disposal of the sanitary towels.

It further states that the annual estimates shall make provisions for all the estimated expenditure for the financial year. It shall provide conditional capitation funds to facilitate the acquisition of sufficient and quality sanitary towels for every registered girl who has reached puberty.

It also provides for investigation of deaths to determine the identities of the deceased persons, the times and dates of their deaths and the manner and cause of their deaths.

The Bills were presented to the President by National Assembly Speaker Justin Muturi at State House in Nairobi.