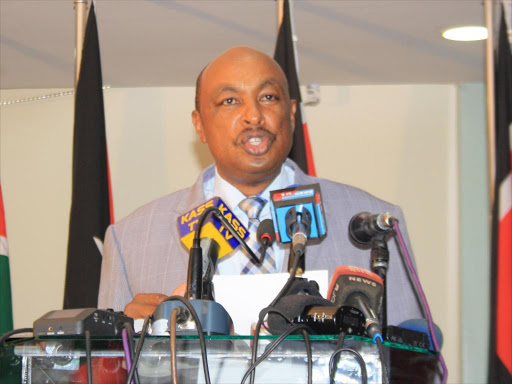 Raila accused Jubilee of dragging KDF into politics by deploying more than 100 of them to Kakamega to allegedly rig the August elections.

But speaking during an interview on Citizen TV on Wednesday, Kiraithe dismissed Raila saying his claims are unfounded.

"KDF are innocent of any politics. Whenever Raila is having political campaigns, security officers are deployed to ensure security."

"It is irresponsible to say the military is in Kakamega to rig elections," he said.

Kiraithe said the military being trained at at Embakasi Garrison

are preparing to provide security during the August elections.

"No KDF soldier is preparing to rig elections as Raila said. We are just preparing to provide security. This is a pure misrepresentation of facts by Raila."

"It is very unfortunate that this is coming from a man I have a lot of respect for."

He said the military monitors what the police are doing adding that when they come in during the elections, they will not be strangers.

"If you look at it from homeland security perspective, this is purely internal and external merge of the military," he said.

But he noted that in operation coordination meetings of the military, the government cannot invite Jubilee or NASA or any political party.

"We brief the political parties periodically but we cannot involve them in our operations. It is not acceptable," Kiraithe said.

Kiraithe said the joint preparedness of the military will continue to ensure any sign of violence is nipped in the bud.

"The politicians who incited Kenyans in 2007 have succeeded to remain the same. There is no KDF involved in election security preparations it's a joint security operation," he said.

The spokesman further noted that county commanders were being trained on communications and joint operations coordination.

On Tuesday, Raila said Nasa is not driving a wedge into their relationship with the military but appealing to them to honour their code and be neutral.

"KDF soldiers are being trained for recruitment as polling and presiding officers to help rig the election," he told a press conference in Nairobi.

"Several officers are being hosted in Kakamega at the former provincial HQ. They are being prepared to become Returning Officers."

Raila further claimed the soldiers are training civilians and that the programme is similar to what was allegedly done at the same venue before the 2007 general election.

"We are challenging the national government and leaders of security forces to explain why military officers are training civilians," he said.

He noted: "A training of KDF officers on crowd control is going on at Embakasi military barracks."

claimed the NIS was interfering with voter registration by listing people in Uganda and Ethiopia.

The IEBC and the Interior Ministry dismissed the assertions as "malicious and intended to undermine the voter registration process".