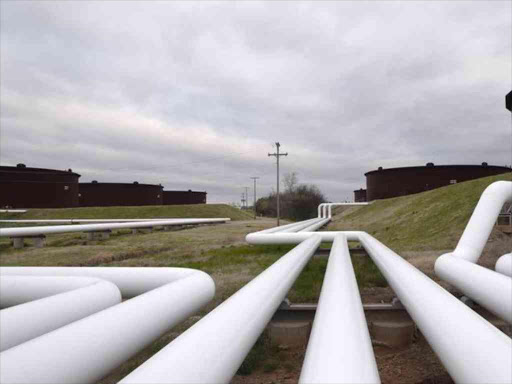 "The 1,445 km-long, 24-inch diameter pipeline will be heated so it can keep highly viscous crude oil liquid enough to flow." /REUTERS

Uganda and Tanzania signed a framework agreement on their proposed $3.55 billion crude export pipeline on Friday, a key milestone for the project, which is expected to start pumping Ugandan oil to international markets in three years.

An official at Uganda's Ministry of Energy told Reuters the agreement covered terms on tax incentives for the project, implementation timelines, the size of the pipeline and local content levels, keeping it on track to complete in 2020.

Adewale Fayemi, the manager for Uganda at Total, said the project will become "the longest electrically heated crude oil pipeline in the world".

"It's a record," he told Reuters, adding it will increase the flow of foreign direct investment and open a new phase of economic development in the region when completed.

The 1,445 km-long, 24-inch diameter pipeline will be heated so it can keep highly viscous crude oil liquid enough to flow.

It will begin in landlocked Uganda's western region, where crude reserves were discovered in 2006, and terminate at Tanzania's Indian Ocean seaport of Tanga.

Total is one of the owners of Ugandan oilfields, alongside China's CNOOC and Britain's Tullow Oil.

Total has said it is willing to fund the pipeline's construction but has not what stake it will own in the project.

Irene Muloni, Uganda's energy minister, said construction of the pipeline would "facilitate and boost trade in the region" and create over 10,000 jobs.

The agreement stipulated that Uganda would pay an estimated transit tariff of $12.20 per barrel for pumping its oil through the pipeline, she said.

In January, both countries awarded the Front-End Engineering Design contract for the pipeline to Houston-based Gulf Interstate Engineering.

Tanzania had offered a "fiscal incentives package" that led Uganda to choose it over Kenya as the favoured host for the pipeline, Muloni said. She did not describe the incentives.

Kenya had bid to host the same pipeline, which would have allowed it to earn transit fees and also transport its own crude in the Lokichar basin in the northwest.