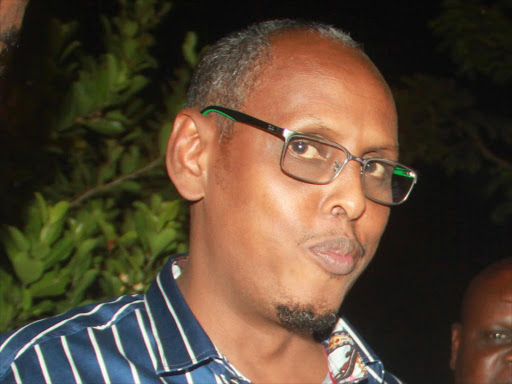 was sacked from the Kenya Defence Forces for engaging in drug trafficking and terror activities.

The viral post further claimed that the international policing agency offered Sh1 million for anyone who might lead to his arrest.

while the county official blamed bloggers allegedly hired by Jubilee.

The county official said the claims were part of a scheme against Joho’s administration.

"Certain individuals and groups affiliated with Jubilee Party have resorted to ill-advised and poorly executed strategies on social media,

designed to malign my good name," he said on his Facebook on Wednesday.

"We will neither be cowed nor intimidated by such schemes. We have only been inspired to work harder and make sure the Coast region is impenetrable to

is one of Joho's confidants and

doubles as his bodyguard since his security detail was withdrawn by the government.

Joho rejected police officers assigned to him citing fears of a plot to plant drugs and guns at his home and incriminate him.

recently reported to police that six armed men were seen at his vacant house in Nyali, which was pulled down for reconstruction.

Joho is also embroiled in a tussle with President Uhuru Kenyatta, particular over development projects in the county.

The President, while relaunching Mtongwe ferry services, warned he would "deal with Joho", whom he said keeps following him.

Mombasa MCAs demanded that Uhuru tells Kenyans what he meant when he said he would deal with their Governor.

Uhuru, Joho and the Commission for Revenue Allocation have given varying reports on the amount of money the national government has disbursed to the county.

The President’s sensational accusation that Joho has failed the county, despite getting Sh40 billion over four years, has not been substantiated.

The Governor has also dared Uhuru

to go ahead and investigate him after the Kenya Revenue Authrotiy demanded his bank account details.

In a letter to Diamond Trust Bank, the taxman sought to obtain Joho's bank statements dating back to January 2011.

Post a comment
WATCH: The latest videos from the Star
by CALVIN ONSARIGO, @kalvonsa
News
22 March 2017 - 09:00
Read The E-Paper