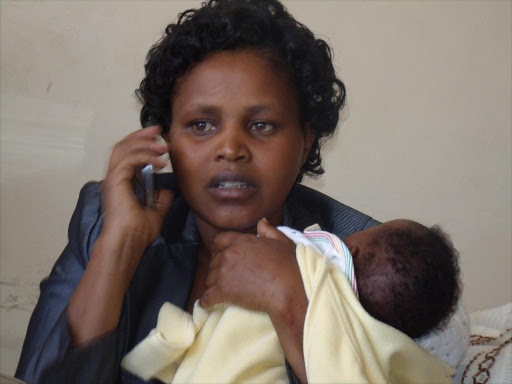 Meshack Yebei's wife Lilian with her baby when they received the news of her husband's death. She was attacked on Monday, January 16, 2017 by unknown people. /FILE

The wife of former ICC witness the late Meshack Yebei was attacked and seriously injured by unknown people in Eldoret on Monday night.

Lilian Yebei was accosted by a gang of men who cut her Langas Estate house's padlock to gain entry.

She was admitted to the Moi Teaching and Referral Hospital with deep cuts on her head.

Police, who visited the scene moments after the attack, said they have launched investigations into the matter.

Lilian was not able to talk when the Star visited her at the hospital.

A relative said she had been trailed by unknown people for the last two months.

"We were informed that some suspicious people had visited the estate and asked to know where she stays," the relative said.

The attackers took away her mobile phone and did not hurt the children who were in the same house.

Yebei was murdered under unclear circumstances two years ago; his body was found dumped in Tsavo forest.