US disputes Kenya's allegation that IFES is not a registered company 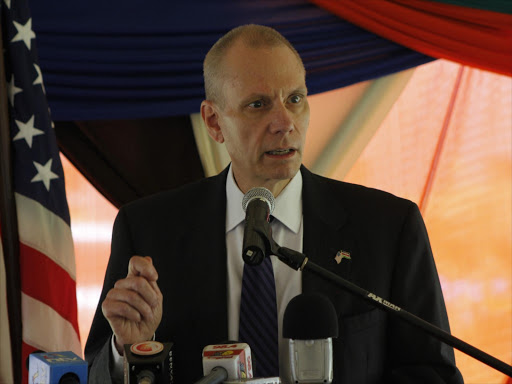 A file photo of US ambassador to Kenya Robert Godec. /Monicah Mwangi

The US government has rejected Kenya's claims that IFES, is operating in the country illegally.

has been carrying out their programs in the country for the past seven years.

"As close friends of Kenya, our electoral assistance is just one small part of a very much larger partnership in which we work together every day on education, health, security, the environment, and economic development," Godec said in a statement.

The reaction comes a day after a USAID funded civic education program worth Sh2 billion run by IFES.

"We do this because effective democracies depend not just on government institutions, but on non-governmental institutions as well. A free media and independent civil society both have critical roles to play in democracies."

He also stated that: "They

do not provide electoral assistance to any organization, governmental or non-governmental, to influence the election results for any side, political party, or candidate.

Rather, our assistance supports the Kenyan people to independently exercise their right to vote and have their voice heard."

Executive director of the NGO board Fazul Mahamed on Monday stated that the organisation does not exist in the their list of companies operating in Kenya.

The board has advised CBK to immediately freeze all bank accounts and any other funds held under the name of the company until further notice.

Post a comment
WATCH: The latest videos from the Star
by RHODA ODHIAMBO , @OdhiamboRhoda
News
20 December 2016 - 15:00
Read The E-Paper