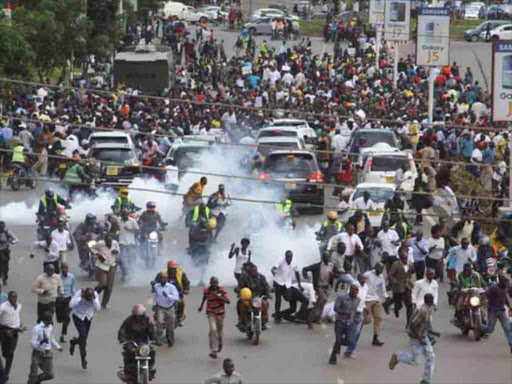 Demonstrators teargassed at Independent Electoral and Boundaries Commission offices during Cord protests on May 16, 2016. Photo/Courtesy

Most Kenyans are afraid that violence will be experienced in the 2017 general election, a survey has found.

The survey on citizens views on security and safety

in Kenya found 70 per cent were "afraid", 44 per cent "very afraid" and three out of ten citizens (28 per cent) not worried about the possibility.

"Political competition is expected to be intense and much is at stake for the incumbents and their challengers,"

Twaweza East Africa said upon the release of the findings on Tuesday.

The survey showed the feat was founded on experiences members of the public have had.

four out of ten citizens (38 per cent) have felt insecure in the last three months.

The organisation noted that this was despite

an improvement in security operations in many parts of the country.

Patrols were increased in Mombasa and Mandera counties following attacks by al Shabaab militants, who have carried on with their sporadic attacks.

In counties including Nairobi, Kisumu and Siaya, the charged atmosphere witnessed during Cord's calls for an overhaul at the IEBC raised concerns about chances of violence during the elections period.

But 44 per cent of those interviewed said the state of security in their ares of residence has remained the same, while 18 per cent said it had

"The good news is that the majority of citizens reported they have not personally experienced violence or insecurity (80 per cent)," said the report.

The public has asked the government to ensure security is heightened ahead of the polls.

Several local and international leaders have also called for peace during the polls, for the sake of economic stability.

The findings of the survey were based on

The data was collected from

1,801 respondents across Kenya between August 15 and September 6.