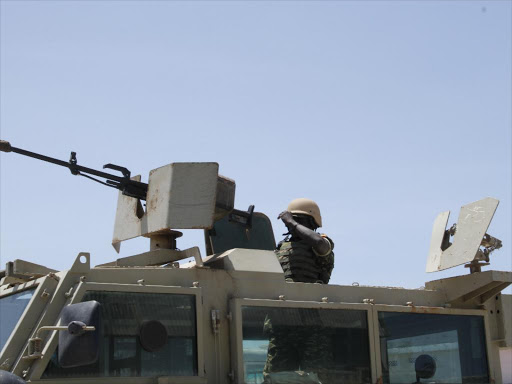 An Amisom troop in a military vehicle during an operation in Mogadishu town on April 27. Photo/Monicah Mwangi

More than 140 al Shabaab fighters were killed by KDF soldiers during a botched attack in Somalia’s Afmadhow area in Lower Jubba last week. The gun battle lasted for three hours.

Reports indicate about 500 al Shabaab militants in eight gun-mounted pickups and four lorries, attempted to overrun Jubaland Forces in Afmadhow town. The attackers first targeted a police station, but were repulsed by both Jubaland Forces and Somalia National Army troops, before the KDF Special Forces arrived. The soldiers destroyed two of the gun-mounted vehicles and killed many militants. A small unit of KDF Special Forces surrounded the attackers and used portable 60mm mortars and machine guns to defeat them. Al Shabaab were forced to withdraw and retreat towards Miido town with the KDF and the SNA in hot pursuit. Initial battle assessment traced 140 bodies, but there were indications other bodies had been dragged away by the militants, who never leave behind their dead.

This comes hardly a week after the Somalia National Army’s US-trained commandos raided al Shabaab’s Anole village base in Lower Jubba and killed an unknown number of fighters.

Meanwhile, KDF fighter jets on Friday bombed al Shabaab’s Ali Hared base shortly after the militants staged another botched attack on the SNA bases about 20km from Juungal.