We are committed to uniting all Kenyans, says President Uhuru 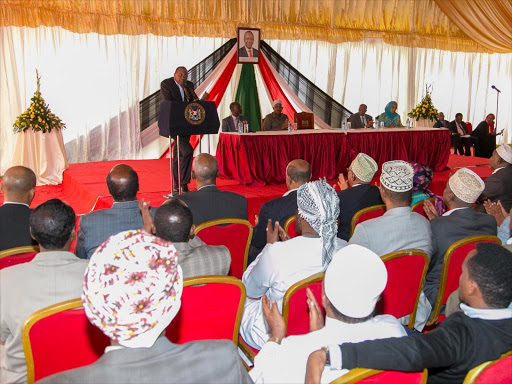 President Uhuru Kenyatta addresses a delegation of the Isahakia community who paid him a courtesy call at State House, Nairobi on Friday, October 28, 2016. /PSCU

President Uhuru Kenyatta has affirmed that the government is committed to uniting the country and serving all Kenyans without discrimination.

The President said Kenyans should shun tribalism and join hands in building a country that they will always be proud of.

“As members of the Jubilee party, we believe that the country can make a lot of progress if we are all united,” President Uhuru said.

President Uhuru was speaking on Friday when he addressed a delegation of the Isahakia community who paid him a courtesy call at State House, Nairobi.

He commended the community for living peacefully with other communities in different parts of the country, saying they have proven that Kenya can be an integrated society.

“That is what we want, a country where people are united and live together harmoniously regardless of their tribe or religion,” President Uhuru said.

The community, through their leaders, assured of their support to the President and the Jubilee Party.

“We have sought this meeting with you to affirm our support to you and your Government. We offer our community’s collective strength to support your bid for a second term,” said part of a memorandum read by Rashid Abdi Aman on behalf of the community.

development and unifying the country.

Citing some senior officials serving in the government including Foreign Affairs Cabinet Secretary Amina Mohamed, Duale said members of the Somali community have always delivered in their assigned positions.