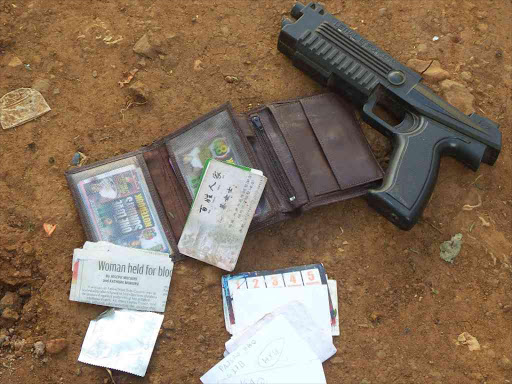 Some of the items found by police after suspected thugs were shot dead in Kawangware, Nairobi, March 22, 2015. /COLLINS KWEYU

and three guns with

The first suspect was killed

during an ambush in Kasarani.

Police said they proceeded to raid his house in Limuru,

where they found an AK 47 rifle with 25 bullets and a pistol with 11 bullets.

Another suspect was gunned down while police were stopping

a mugging spree in Babadogo area.

A pistol was recovered from the man whose accomplices escaped on foot.

Police said the gang of about ten had tried to break into a factory when the alarm was raised attracting the mob.

The rest of the attackers escaped on foot.

has been on the rise in several parts of the country since the beginning of the year.

In areas such as Bungoma, gangs seem to have targets, key among them being security guards.

The three were beaten and stabbed several times before their attackers stole Sh5,000 and escaped on two motorcycles.

A case was reported on Likoni road in Industrial area, Nairobi, the next day; four suspected robbers were

after they were ambushed by Flying Squad officers.

in Nairobi on September 22.

Two were killed at the Kariobangi South railway line after they tried to snatch a woman's handbag.

United Nations Office on Drugs and Crime which reported a global average intentional homicide rate of 6.2 per 100,000 population for 2012.

According to National Police data 72,470 crimes were recorded in 2015.

that crimes were most prevalent in Kiambu with 4,768 cases,

The report indicated the rates of crime in Nairobi had increased with most robbers stealing from residents.

The least number of cases was

experienced decreases incidents of the theft of vehicles and their parts (128 cases).

95 cases and breaking-in, whose cases numbered 65.

Increases were noted in offences against morality (980 ), dangerous

Post a comment
WATCH: The latest videos from the Star
by NANCY AGUTU @NancyAgutu
News
19 October 2016 - 15:00
Read The E-Paper