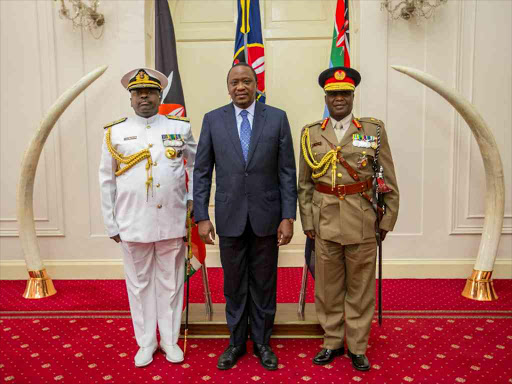 Ngondi who was posted to the National Defence College as commandant.

ceremony that was conducted by Chief of Staff and Head of Public Service Joseph Kinyua.

Uhuru congratulated Kibochi on his appointment and asked him to "continue

in that well-treaded path of commitment and dedicated service to the nation".

He also asked him to support the men and women he will lead.

“As you start your new position, count on our support, commitment and the fact that every single Kenyan appreciates what the Kenya Defence Forces does to keep the country safe every single day," he said.

The President also commended the troops on their professionalism and service to the nation, especially in the fight against terrorism and in keeping peace

He assured KDF of full support and urged them to continue in their efforts to secure the country, saying there cannot be prosperity without security and stability.

“As a country, we are proud of you. As a nation, we continue to encourage you and as an administration, I give you my word that we shall continue to give support to enable you perform your duties,” he said.