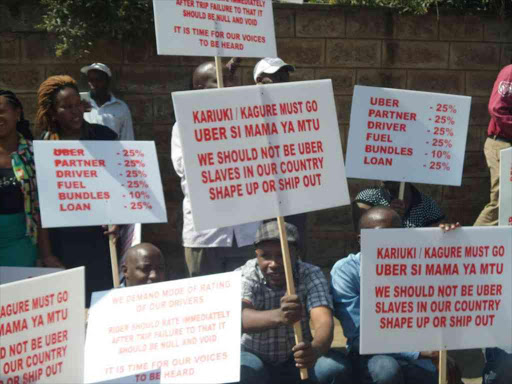 Uber drivers during a protest in Nairobi on Tuesday, August 2, 2016 Photo/Patrick Vidija

Cab hailing service Uber has said it will reassess its revised prices in Kenya should drivers fail to make projected gains.

“But while the city adjusts to the new prices we are putting in place minimum payment guarantees for drivers to ensure they do not lose out," said Anderson.

The announcement came hours ahead of a planned strike by drivers on the platform, over the 35 per cent reduction in fares announced last week.

Drivers complained that the cheaper fares have more than halved their daily earnings raising fears of inability to pay their car loans.

But Anderson noted on Monday the price cut was based on market research.

“After years of experience, including in cities like Lagos in Nigeria, we have learnt that price cuts boost demand. More people request more rides with Uber meaning drivers spend more time earning,” he said.

The GM further said drivers are guaranteed good returns “because our advanced technology means there are fewer minutes wasted”.

favourable terms for partner drivers, to ease business through its mobile platform.

A partnership between Uber and Total service station allows Nairobi partner-drivers to receive discounts on every litre of fuel and get a power wash for Sh200.

A group of drivers under the Kenya Taxi Digital Association said on Monday that they would hold a demonstration in Nairobi between 10am and 1pm.

said they filed a court injunction over the price reduction which they termed unfair.

The meeting caused a three-hour surge as drivers in attendance switched off their phones.

The looming strike is the latest in a series of challenges the Uber has faced in recent months.

Several vehicles operating through the platform were vandalised and some drivers injured after regular taxi operators attacked them citing unfair competition in pricing.

The association was formed by drivers under Uber and Little Cabs to champion their demands.