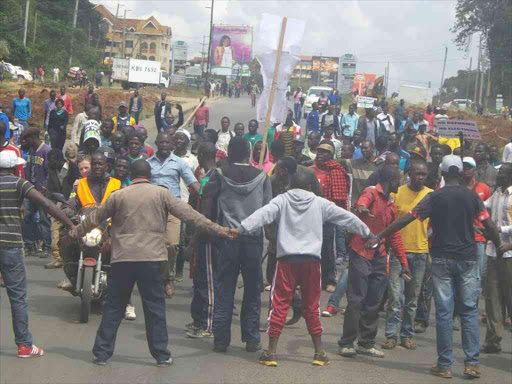 Cord supporters from Kibera in Nairobi county during demonstrations for the forceful removal of commissioners at the Independent Electoral and Boundaries Commission, June 6, 2016. Photo/COLLINS KWEYU

Justice Joseph Onguto noted in a ruling on Monday that police are obliged to ensure law and order is maintained.

Regarding the demonstrations, Onguto said Cord leaders are within their rights to picket or demonstrate for the removal of IEBC commissioners.

The Justice said the constitution allows people to picket so as to air opinions which may be controversial but must be respected.

But he said the removal ought to be done as the constitution stipulates as the IEBC is an independent body.

He also said the protests should not take place on private property.

Cord supporters defied a police ban on anti-IEBC protests and took to the streets in various counties on Monday, burning tyres and blocking roads.

Thika Road was one of those affected by the demonstrators behind Cord leader Raila Odinga's push for reforms to the electoral system.

Youths from Mathare threw stones at vehicles, forcing motorists to use alternative routes.

In Migori county, the demonstrators took to the streets on Sunday, shortly after the 9pm news, when they realised no agreement had been reached on the IEBC stalemate.

Riding on boda bodas and blowing whistles, the demonstrators forced vehicles off the road causing the early closure of businesses.

In Kisumu, protesters blocked roads with burning tyres and stones, a witness said as reported by Reuters.

"IEBC must go," demonstrators in Kisumu shouted, while others carried a banner carrying the same slogan.

In Nairobi, armed and fully-geared anti-riot police were deployed to prevent the protests.

being transported to Kibera.