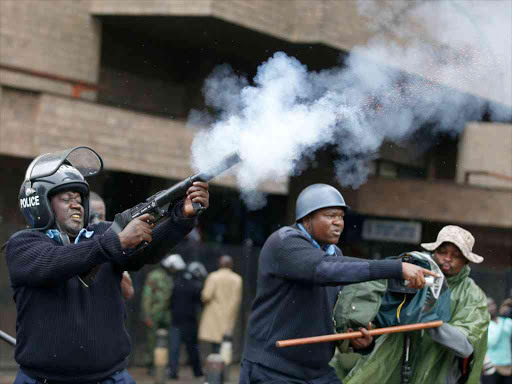 Police lob teargas at protesters pressing for the removal of IEBC commissioners. The Opposition leaders suspended the weekly demos on Wednesday. Photo/FILE

Cord has temporarily suspended demonstrations against the IEBC.

The opposition gave the government

10 days to respond to dialogue calls.

In a joint statement on Wednesday, Senators James Orengo and Johnstone Muthama said they want to resolve the stalemate amicably.

"We have no plans to overthrow Uhuru Kenyatta's government," they said.

"We want peace. We have listened to international community and religious groups.

Jubilee has until June 5, 2016 to respond to dialogue calls," the opposition said.

The leaders said if Jubilee does not respond within the stipulated dates, the demos will get intense.

"We will embark on our weekly protests should Jubilee fail to convene a meeting with the opposition," Muthama said.

The Machakos Senator said that Cord is constituting a team to spearhead talks with Jubilee and are expecting that a team will be formed by the ruling coalition.

"We will not accept the parliamentary route in these negotiations. We want them done outside Parliament," he added.

The leaders said they shall dedicate next week to the pursuit of peace, justice and dialogue.

"We shall henceforth hold prayers in churches, mosques, temples & sanctuaries specifically to appeal for peace to prevail," they said.

following confrontation between police and protesters.

Cord wants IEBC commissioners out of office before the 2017 general elections.

Heads of foreign missions on

Kenyans must take every opportunity for on the IEBC stalemate.

The envoys said dialogue was necessary in order to solve the current standoff between the government and the opposition.