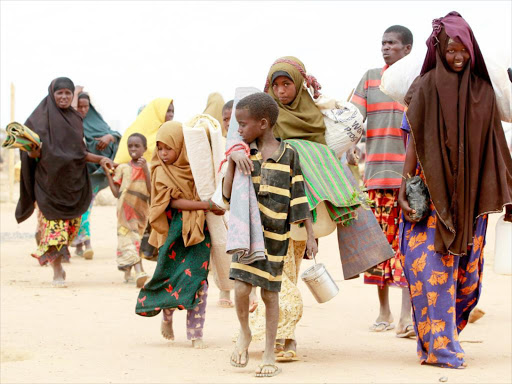 A refugee family walks to a reception centre in Baley near the Ifo extension refugee camp in Dadaab in July 2011.Photo/file

Somalia has asked Kenya to respect the 2013 Tripartite Agreement on repatriation of refugees in its bid to shut down the Dadaab camp.

Somalia ambassador to Kenya Hassan Gamal said modalities on how to return refugees are anchored in the document signed between his country, Kenya and the UN refugee agency.

But Kenya maintains camps will be shut down and refugees moved without adherence to the agreement, citing its sluggish implementation. “That document was signed by the three parties in good faith. It is binding. Ours is to urge Kenya, which has been a host to the refugees for more than a decade, to honor it,” Gamal said.

Kenya said since the signing of the agreement, which is set to expire in November this year, nothing much has yielded, with only 14,000 refugees returning home.

In its bid to return the more than 350,000 refugees, Kenya has been making overtures with the semi-autonomous administration of Jubaland to receive the returnees.

But Gamal said any agreement made with Jubaland must be approved by the Mogadishu-based central government.

“Jubaland cannot enter any agreement with Kenya because it is not a fully recognised state,” he said.

“Nairobi can only discuss with Mogadishu for refugee resettlement and that is going very well as per the tripartite agreement.”

Already, Kenya officials, led by the Parliamentary Committee on Defence and International Relations chairman Ndung’u Gethenji were in Jubaland’s Kismayo, on Friday.

Somali President Hassan Shiekh Mohamud, who is currently in Turkey for the World Humanitarian Summit, is expected in Nairobi towards the end of the week for crucial refugee talks with President Uhuru Kenyatta.