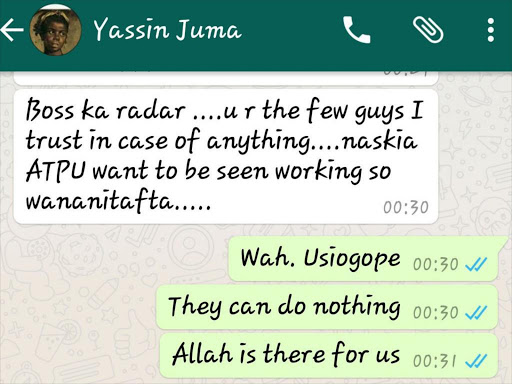 A screenshot of a WhatsApp message former NTV journalist and blogger Yassin Juma sent to a friend days before his arrest. Photo/COURTESY

Former Nation TV reporter and blogger Yassin Juma was trailed for three days by Anti-Terror Police Unit officers before his arrest on January 23, it has now emerged.

A post on social media, by a friend to Juma and independently verified by The Star shows Juma was being sought after by officers days before he was taken into custody.

The post reads "Boss... ka radar (be on alert)... u r the few guys I trust in case of anything [sic]... naskia (I hear) ATPU wants to be seen working so wananitafuta (they are looking for me)."

He shared his fears of being arrested with me on 21st Jan 2016. I encouraged him to stay put and now

Juma was reportedly taken into custody by officers from the special police division at his Donholm house at 6pm on Saturday evening.

He was afterwards taken to the Muthaiga police station where he spent the night.

An anonymous police source has revealed to The Star that Juma will be arraigned in court on Monday and will be charged with misuse of a communication gadget.

The blogger's arrest comes in the wake of a caution by Interior CS Joseph Nkaissery prohibiting online posting of images from the attack on the KDF camp in El Adde, Gedo, Somalia.

An unkown number of soldiers were killed and some taken hostage by the al Shabaab.

Nkaissery said sharing the images, some of which have surfaced on social media, amounts to spreading the terror group's propaganda messages.

Hours after Juma's arrest, social media users started an online petition for the blogger's release under the hashtag #FreeYassinJuma with some questioning President Uhuru Kenyatta's tribute to the fallen soldiers who he said died safeguarding the liberties enjoyed by Kenyans.

Yesterday, paid tribute to soldiers fighting to preserve our free society. Today, his gov't is undermining it.

When there is liberty, you expect a higher degree of freedom and not human rights abuse. .

Other users have suggested that arresting Juma who is privy to information vital to the success of the war on terror, is counterproductive. They have argues that gains made thus far by the KDF deployed with AMISOM will be eroded if citizens with information are arrested rather than encouraged to give information.

We are fighting the war on terror by arresting those who can tell us what we are missing? Dafuq.

Journalists have an ear to the groundThe American Govt at one stage used Peace Corps volunteers to gather intelligence...

Arresting Journalists sure way to lose ,Public trust & sharing info out of the window

Others users termed the arrest as a gag on the media which they said is setting a dangerous precedent on media freedoms.

They further cautioned that it could lead to mass abuse of journalists' rights if unchecked.

When we bury the TRUTH and continue dancing around it in falsehoods, it will eventually germinate and catch up with us.

Comms gadget misuse law is greater threat to democracy than any posts seen. Substantiate or now!