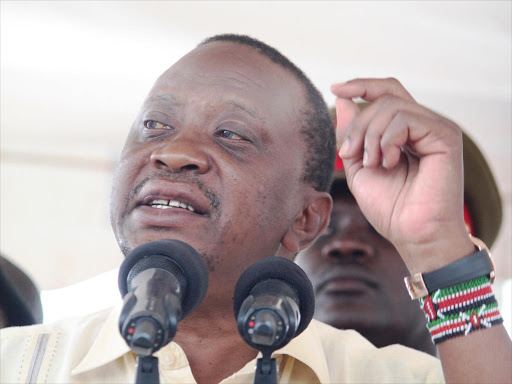 PRESIDENT Uhuru Kenyatta has ordered an audit of how public primary and secondary schools have spent the billions in free learning cash released to them across three years.

Free Primary Education funds were first rolled out in 2003, with each child getting Sh1,020 per year.

In 2014, the Jubilee government increased FPE to Sh1,420 to cater for an estimated enrollment of about 10 million children in about 23,000 public primary schools. Annually this costs Sh14 billion.

The FPE cash is divided into school instructional materials and the general purpose account that initially got Sh650 and Sh350 respectively, totaling Sh1,020.

With the increase of capitation to Sh1,420, it is unclear which components benefited most, although the general purpose account is said to have got the larger share of the Sh400 increment.

Cash for Free Day Secondary Education started in 2008, with an initial capitation grant of Sh10,265 per student per year.

The Secondary fund has been increased to Sh12,870 and currently benefits about 2.3 million students in about 8,000 secondary schools. Every year Sh30 billion is released to the Secondary School programme.

Uhuru’s directive on the audit was confirmed by Education Cabinet Secretary Fred Matiang’i, who said: “The President has demanded that the audit be carried out in seven days, and the report presented to him on Thursday this week.”

The billions of shillings released by government that trickles down to the schools in the thousands and millions has to be accounted for to enhance quality education, Matiang’i said in what appears like a wake-up call to school heads who continue to charge parents extra levies despite government financial support to schools.

Matiang’i said the audit would establish how the amount of money received by schools was spent from 2013, when Jubilee was elected.

The CS added that while schools continue to charge extra levies the government has disbursed an estimated Sh150 billion in the last three years to cater for maintenance and infrastructure alone.

It is unclear how the counties will manage to corroborate the audit in seven days.

In 2009, a forensic audit by Treasury discovered that between Sh4.6 billion to Sh8.2 billion, mainly donor cash for FPE for the period between 2005 and 2009, could not be accounted for at Education ministry level.