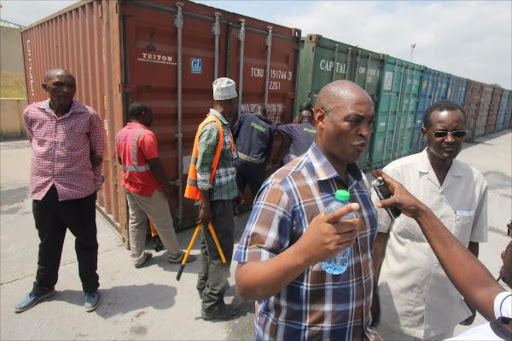 Ethanol worth Sh288 million and contraband sugar valued at Sh56 million were seized in Mombasa between October and December 2015, the EACC has said.

The ethanol in 64 containers had been imported by unlicensed excise manufacturers, said CEO Halakhe Waqo.

"Sugar is a protected and highly sensitive commodity which requires an import permit by the sugar regulatory authority. It attracts 100 per cent duty over and above levies," he said.

He explained that the sugar was from Brazil and had been declared as dried grapes, whole lentils, photocopiers, office furniture and new shoes.

Waqo said the containers were to be discharged were bound for neighbouring countries.

He said the containers were seized in a close collaboration of security officers following the receipt of intelligence reports.

The Ethics and Anti-Corruption Commission chief executive issued a joint statement with the Kenya Revenue Authority at the Port of Mombasa on Friday.

Waqo said 11 companies and 33 individuals are being investigated over the "simultaneous smuggling of illegal goods through porous Kenyan boarders and diversion of multi-million goods at the Port of Mombasa".

"As part of enhanced enforcement measures, the tax evaders will be prosecuted and the containers forfeited to the state and destroyed. We will catch and prosecute those involved," he said.

He warned persons perpetrating fraud in customs processes and their collaborators saying they will be arrested and punished.

The EACC boss said a meeting of the Treasury ministry and commissioners general of revenue authorities from Kenya, Uganda and Rwanda will take place on Saturday.

They will discuss mechanisms for coordinated regional response to the challenge of cargo diversion, he said.

CID boss Ndegwa Muhoro said it will no longer be "business as usual" as big fish will be targeted and their assets and accounts frozen after investigations.

Post a comment
WATCH: The latest videos from the Star
by NANCY AGUTU AND ELKANA JACOB
News
15 January 2016 - 15:00
Read The E-Paper