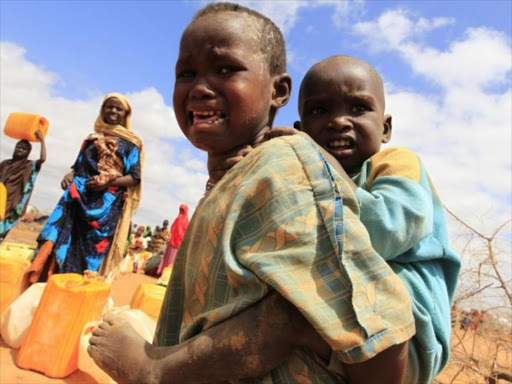 A Somali refugee child who recently arrived at the Dagahaley camp cries while carrying a sibling, in Dadaab. Photo/REUTERS

Seven people have died and 541 admitted after a cholera outbreak in Dadaab's Dagahaley refugee camp.

About 30 per cent of the patients are children under twelve, Médecins Sans Frontières (MSF) said, adding the heavy rains and poor sanitation stoked the spread.

“The number of patients in the hospital has doubled over the last week - children are the most affected, including many with malnutrition,” he added.

The cholera epidemic has affected 16 counties in Kenya since December 2014. It was officially declared in Dadaab, which has more than 500,000 refugees, on November 23.

The outbreak is believed to have started among newly arrived refugees from Somalia, who may also have contracted it en route by drinking unsafe water from areas flooded by heavy rains, the UNHCR said.

The UNHCR and other aid agencies set up treatment centers in the camp for severe cases and promoted safe hygiene practices, but insecurity has continued to hamper aid efforts.