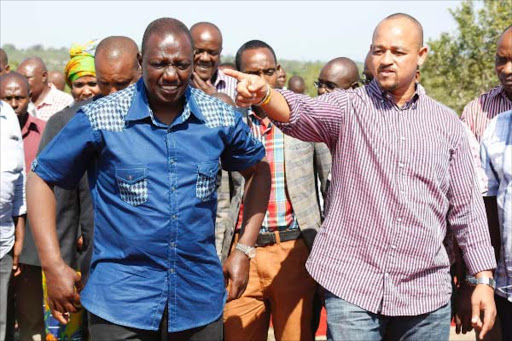 Deputy president William Ruto listens to Lunga lunga Mp Khatib Mwashetani during the laying of a foundation stone for the construction of classrooms at Juakali primary school in the constituency yesterday.pic\Charles Kimani\DPPS

THE African Union will seek to be enjoined in the ICC case against Deputy President William Ruto to challenge a recent application by the prosecution.

This follows a decision made by The Executive Council of the AU on Saturday night during the ongoing Summit in Sandton, South Africa.

The council also said that the AU should write to the UN Security Council informing it of a decision made in January to request the termination of Ruto's case.

In the decision, the African heads of states requested the ICC to suspend or terminate the proceedings until Africa's concerns on the Rome Statutes are considered.

"The Executive Council requests the African Union Commission to write to the UNSC informing it that the Committee of Ministers of Foreign Affairs intends to meet the UNSC to discuss and follow up the matter," the Saturday decision states.

In January, they had requested for the suspension of proceedings against Sudan President Omar al Bashir, urging the UNSC to withdraw the referral to the ICC.

Angered by a fresh push by ICC prosecutor Fatou Bensouda to have statements recanted by some witnesses adopted as evidence, Kenya has turned to the AU to pile pressure on the Hague-based court.

Kenya is protesting that Bensouda is using a rule that was adopted when the Kenyan cases had already started contrary to an agreement by the Assembly of State Parties.

Kenya adds that according to the Rome Statute, the rule, whose suspension was negotiated by the African delegation, cannot be used retroactively to the detriment of the accused.

Last month, Bensouda admitted that she lost a lot of incriminating evidence due to the recanted evidence and launched a fresh attempt to have them admitted as evidence.

She argues that the witnesses recanted their evidence because they were bribed or intimidated and the judges are set to rule on the issue in mid-July.

Attempts by Kenya to be enjoined in the application was rejected by the ICC judges.

Ruto's and his co-accused Joshua Sang's lawyers have also protested the issue in court, saying the prosecution is causing unnecessary delays.

According to the court's tentative calendar, the only time that their trial is slotted is from October 1 to November 27, raising questions on when the prosecution will conclude its case.

The latest application, which the judges said have left the prosecution case open, is set to be decided in mid-July.

Initially, the judges had said that the prosecution would conclude its case by March 13 before the five-month break when they would consider the no-case-to-answer motions.

Bensouda is also under pressure to terminate the case after she withdrew that of President Uhuru Kenyatta last year for lack of evidence.