The patient is a 32-year-old man from Kayoro village in Nambale, Busia, who was passing blood in urine. 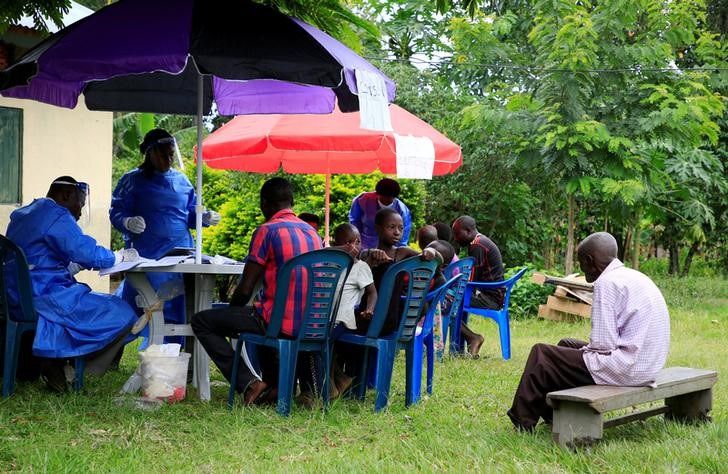 Ugandan health workers speak to members of the community before carrying out the first vaccination exercise against the ebola virus in Kirembo village, near the border with the Democratic Republic of Congo in Kasese district, in this file photo,
Image: REUTERS

The first public case of suspected Ebola infection was reported on Thursday, but the Ministry of Health in Nairobi said tests in one laboratory turned negative.

Confirmation of Ebola virus infection can be made using different diagnostic methods, including a 15-minute PCR test.

“One laboratory shows the symptoms are not caused by Ebola infection,” said an official at the Ministry of Health in Nairobi, confirming the ministry would issue a statement after one more confirmatory test.

The Busia case was reported on Thursday by Boaz Gichana, a subcounty disease surveillance coordinator from Mumias West in Kakamega county.

Gichana had said the patient was a 32-year-old man from Kayoro village in Nambale, Busia, who was passing blood in urine.

He also exhibited general body weakness and actively bled from a cut on the arm. All other vitals were normal, Gichana reported.

“The patient had travelled to eastern parts of Uganda to visit a relative on September 15, 2022. While in Uganda he got a trauma and was cut at the right upper limb, he sought medical attention at a health facility in Uganda –the cut was sutured.  He moved to Kenya for further Medical attention,” Gichana said.

He added, “On September 28, 2022 he started experiencing blood in urine and proceeded to St Mary’s hospital Mumias for further management.”

The Ministry of Health said the blood samples were taken and transferred to Nairobi on Thursday for tests.

Results from the preliminary test were reported on Friday.

According to the World Health Organization, the time interval from infection with the virus to onset of symptoms is from two to 21 days.

Symptoms include fever, fatigue, muscle pain, headache and sore throat. They are followed by vomiting, diarrhoea, rash, impaired kidney and liver function and, in some cases, both internal and external bleeding.

But a definitive lab test is important because many illnesses can have the same symptoms as EVD, including Marburg fever, flu, malaria, and typhoid fever.

Currently, only four laboratories, based at the Kenya Medical Research Institute, have negative pressure level III lab requirements for testing Ebola and are accredited by the World Health Organization.

A negative pressure system is one that ventilates air out of the laboratory.

“The first referral and first hope for any case of Ebola at the beginning of the outbreak if there comes will be the Kemri viral hemorrhagic lab which is WHO accredited,” head department of lab services at the ministry John Kiiru said.

“It has a lot of knowledge on viral hemorrhagics, but we are likely to pressurise the others in case many cases will appear.”

At least 36 cases have been confirmed and 23 deaths reported, with a case fatality rate of 64 per cent.

According to the Ministry of Health, Kenya has not yet reported any case of Ebola.

The ministry has, however, mapped out 20 out of the 47 counties as high-risk counties.

Heath DG Patrick Amoth called on Kenyans to report any visitors coming into the country through the informal routes to chiefs, nyumba kumi and village headmen.

Amoth said 18,726 people were screened at the entry points between September 20 and 25.

“We are confident that with the lessons learnt from Covid-19 we are in a better position to mount a response than before because we can leverage on the structures we developed during the Covid-19 pandemic,” Amoth said.

He added, "The nature of the enemy we are going to deal with is a little bit different from Covid because of human-to-human contact transmission of Ebola [in contrast to respiratory transmission}.

The ministry said flights from Uganda will not be suspended but instead the ministry has heightened surveillance and screening at border points and all points of entry.

“We reassure the country the ministry is up to the task and we are making every effort to ensure the country is protected. There have been very many concerns over surveillance efforts and we reassure Kenyans they are in top gear and nothing is being left to chance,” the ministry's director of Public Health, Dr Francis Kuria, said.

Ebola can be prevented with the Ervebo vaccine, which has been shown to be highly effective.

Why is Uganda's Ebola outbreak so serious?

So far 31 cases have been confirmed, though it is feared that there could be many more.
News
2 months ago

At least 16 cases and several fatalities reported in Uganda.
Counties
2 months ago

At least seven medical workers have potentially been exposed to the virus.
News
2 months ago
Post a comment
WATCH: The latest videos from the Star
by JOHN MUCHANGI Science Editor
Health
01 October 2022 - 08:16
Read The E-Paper