Why Migori farmers have dumped tobacco for beans 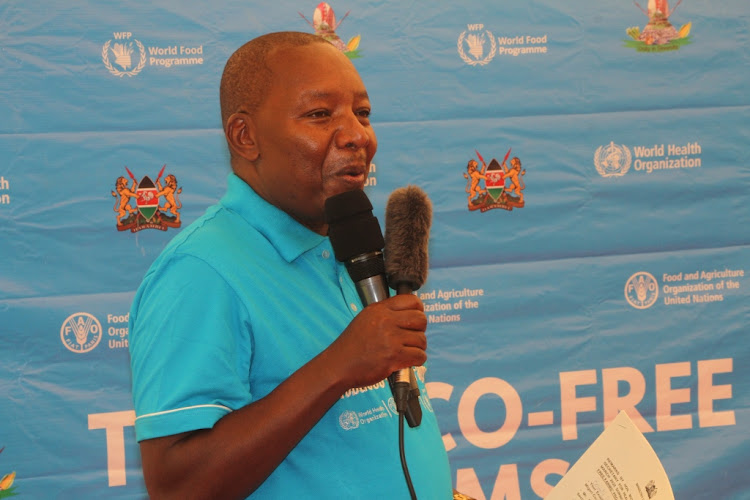 TOBACCO BURDEN Ephantus Maree, Director of Non-Communicable Disease at the Ministry of Health during the launch
Image: MANUEL ODENY

Close to 1,000 tobacco farmers in Migori county have shifted from the crop to beans farming in a project run by United Nations.

On March 23, the UN officially launched the project in Migori town despite it running from last year with 700 farmers already taking up planting of Nyota variety of beans which is high on iron.

The launch of Tobacco-Free Farms project  was done at governor Okoth Obado’s official residence and was attended by officials from national government and World Health Organization (WHO), the World Food Programme, and the Food and Agriculture Organization of the United Nations (FAO).

Already farmers have sold 135 metric tons of beans to the WFP at Sh100-per-kilo which was more profitable and friendly to the environment compared to tobacco farming.

“Tobacco farming was not lucrative as costs of inputs was high, farming was labour intensive starting from October to August while beans farming only takes three months,” Agnes Atieno a farmer from Bondo Nyironge village who has two acres of land said.

Atieno said on her farm, only half an acre was left for other crops as the rest was always under tobacco which caused high malnutrition and food insecurity as tobacco took long in the farm.

“From planting, weeding and curing in smoky kilns all family members were to be involved which saw a lot of school drop out and disruption of learning as children were to be in the fields,” Atieno said.

Job Otieno said curing of tobacco in kilns using firewoods was behind defrorestation and it caused lung disease during placing tobacco leaves in smoky kilns for curing.

During training for beans farming we had X-rays done on our lungs and we were not healthy. We saw a need to make a shift and hope more farmers will join in as we now have a new cash crop

“During training for beans farming we had X-rays done on our lungs and we were not healthy. We saw a need to make a shift and hope more farmers will join in as we now have a new cash crop,” Otieno.

Kenya was one of the first countries to ratify the legally binding WHO Framework Convention on Tobacco Control (WHO FCTC) in 2004 to control tobacco and has Kenya Tobacco Control Act promote economically viable alternatives to tobacco production.

Farmers said attempts to shift from tobacco farming has been hampered by lack of a ready market and coming in of WFP to buy up beans will bring a shift from the crop.

Data from WHO said tobacco as a cash crop contributes less than 1% of Kenya’s GDP, with more than 6,000 Kenyans dying of tobacco-related diseases every year (79 men and 37 women die per week).

Tobacco kills more than 8 million people around the world every year.

Ketca chairman Joel Gitali said this will inspire the entire region and hasten efforts towards a tobacco-free Africa.

"On behalf of TC CSOs, I thank all UN agencies involved, led by WHO. Indeed we have had a perfect and effective participation of WHO in TC in Kenya for a long time. Our partnership and collaboration with the country office has been great," he said.

"I also thank MoH and TCB for having persisted in addressing the tobacco farming menace. We appreciate the manner in which the ministry of Agriculture has come in."

Hr congratulated the government of Migori for being the first to benefit from this program in the region.

"We all need to ensure that this vital project succeeds. It will largely contribute towards socio-economic development of our country. God bless all those involved," Gitali said.

Health Cabinet Secretary (CS) Mutahi Kagwe through a statement read by Ephantus Maree, Director of Non-Communicable Diseases at Ministry of Health said government will support the project which will put the health of Kenyans first.

“The project in Migori for the tobacco farmers is a major shift towards attaining a healthy nation and the Ministry of Health fully supports such ventures,” Kagwe said.