Only 5,800 pieces were dispensed last year. Some say it's uncomfortable and makes noise.

• Peter Mogere says cost is also a barrier as it costs Sh200 a piece, compared to male condoms which cost Sh50 or less.

• IUD uptake was at 3.9 per cent, emergency contraception followed at 1.6 per cent while female condoms were the less dominant method of contraception used at 0.8 per cent. 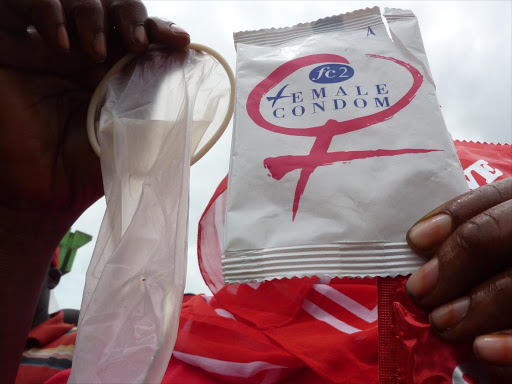 FEMALE CONDOM: It is an effective barrier method that no one wants to use.

The female condom has failed to gain any popularity in Kenya, nearly 20 years after it was introduced into the country.

The latest figures from the Health ministry suggest it is the most unwanted modern birth control method, despite its efficacy in preventing pregnancy and sexually transmitted infections.

Only 5,800 pieces were dispensed from health facilities countrywide last year, mostly in Nairobi, according to the ministry’s data analytics platform, which aggregates information from all health facilities.

In comparison, more than 100 million pieces of male condoms are used in Kenya every year.

The female condom was introduced in Kenya late 1990s as a potential game-changer that gave women the opportunity to protect themselves from both STIs and pregnancy.

It works just like the popular male condom by preventing the exchange of semen and vaginal fluids during sexual intercourse.

“The biggest challenge is knowledge on how to use it and where to access it. Advocacy from the government or partners is not there,” says Peter Mogere, a health research advocate and project coordinator of the Kemri’s Partners in Health Research & Development.

Mogere says cost is also a barrier as it costs Sh200 a piece, compared to male condoms that cost Sh50 or less.

“Some females say it's uncomfortable. Others say men complain that it makes noise,” he says.

Data from the Reproductive and Maternal Service Unit of the Health ministry lists it at the bottom of the available family planning methods.

Last year, injectables were the most common contraceptive method used by 54.1 per cent of all women practising family planning, followed by the male condom at 13.8 per cent, implants at 13 per cent and the pill at 12.7 per cent.

IUD uptake was at 3.9 per cent, emergency contraception followed at 1.6 per cent while female condoms were used by 0.8 per cent only.

National Council for Population and Development director general  Mohammed Sheikh said modern contraception use has helped drop the country’s Total Fertility Rate in the last decade from 4.6 to 3.4 births per woman between 2009 and 2020 with notable variations among counties.

“These inequalities pose a risk of reversing the progress Kenya has made in enabling access to modern contraception.”

Barrier methods such as female condoms are recommended for all couples, especially those who need temporary family planning methods.

This would be either because they do not have regular sex with their partners, they are awaiting the use of another method, or as a backup for another method.

Condoms are also recommended for protection against STIs.

Post a comment
WATCH: The latest videos from the Star
by JOHN MUCHANGI Science Editor
Health
28 September 2021 - 06:20
Read The E-Paper