They have no idea why wearing gear is important.

• Study shows most solid waste workers though aware of the risks that come with working at dumpsites, rarely practise good hygiene.

• Many countries in sub-Saharan Africa are having a difficult time dealing with solid waste generation and management. 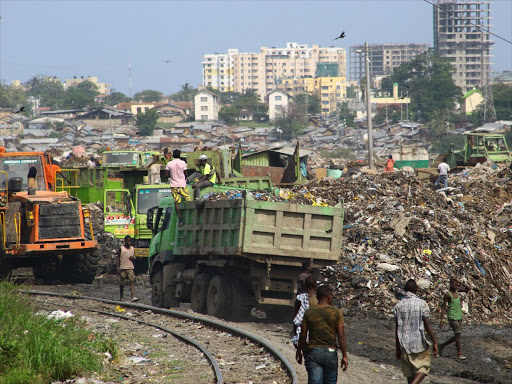 Solid waste workers, despite knowing the risks associated with the job, barely observe good hygiene practices, a study has found.

They also do not own protective gear because they have no idea why it is important.

The study was released on March 12 by the African Population and Health Research Centre. It covered a period of 12 months.

“Good hygiene practice such as hand-washing with soap was found to be lacking among solid waste workers," it says.

"Basic and yet proven interventions such as clean water for hand-washing and or drinking are not always available.”

Other reasons why solid waste workers do not use protective gear include they have difficulty working effectively with it on as well as high poverty levels, which mean they could not afford them.

This despite most of them having injuries resulting from medical needles, presumably from medical facilities.

The study was conducted at the Dandora dumpsite and included solid waste pickers who work at the site and garbage collectors who bring waste using trucks.

Participants included males and females over the age of six. Those who were below the age of 18 were 6.6 per cent, those between 18 and 24 were 22.6 per cent while those who were above 25 years of age were 70.8 per cent.

The study states that the health of solid waste workers should be regarded as important and prioritised by individuals, communities and the government.

It established that many countries in sub-Saharan Africa are having a difficult time dealing with solid waste generation and management.

“Nairobi, the largest city in the country, has only one official dumpsite at Dandora, which is poorly designed and managed. This situation creates a conducive environment for disease transmission agents,” it notes.

The study found out that only seven per cent of the workers had access to toilets while at work, 31 per cent regularly washed their hands while 20 per cent had never been trained on matters safety and infection.

Support by the government in the provision of protective gear and infrastructure services for the workers is low, while injuries reported were on the higher side.

The participants said they are aware they can contract ailments such as respiratory complications, typhoid fever and skin conditions.

The study suggests that the economic and technical performance of the solid waste sector is included in annual reports and reviews for planning.

It explains that by doing so, the data collected will foster policy and programme interventions on the safety of solid waste workers.

“Solid waste work-related injuries and unsafe procedures that have health implications will be addressed," the study states.

"It is, therefore, justifiable that the Kenyan labour law emphasises the right of every individual or citizen to work in an environment that is safe.”