Ngatia said Raila will change the economy of this country.

• Chamber of Commerce boss said the community will benefit a lot in development from Raila, saying he's the only one who can transform the country.

•He said Kenyans should elect leaders with development records who will revive the economy. 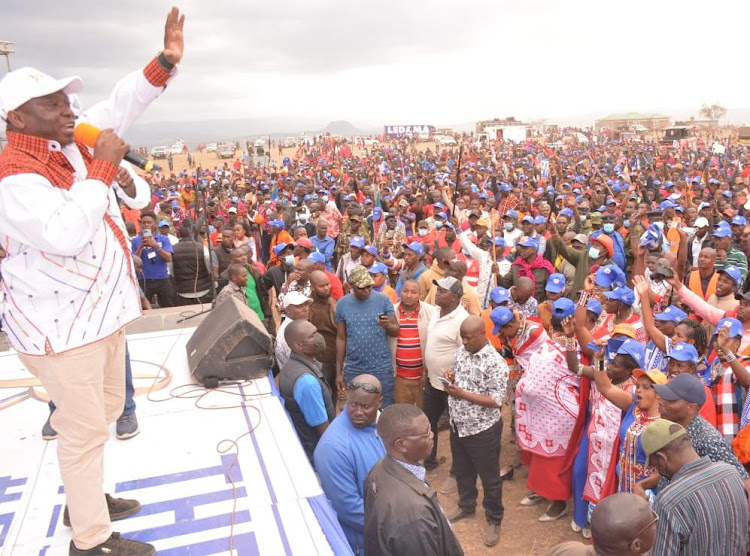 Ngatia said the community stands to benefit greatly in development from a Raila government, saying he is the only leader who can transform the economy.

“As Mt Kenya region, we have agreed to support Raila’s bid and all the people should rally behind him because he is the best person to change this nation,” Ngatia said. He is the president of the Kenya National Chamber of Commerce and Industry

He made the remarks during the Suswa Declaration Rally for the Maa Community at the historic Suswa grounds in Narok county on Saturday.

Ngatia  said Kenyans should elect leaders with development records who will revive the economy.

“We need to properly assess the kind of leaders we elect for the nation to develop and grow economically,” Ngatia said.

The KNCCI boss singled out Narok county as it poised to be an economic hub if the right leadership is given the chance to lead.

“We need to make Narok great by ensuring we support the tourism and agriculture sectors and that will turn the county into an economic powerhouse. We will leap forward to be the most developed county in the country,” Ngatia said.

President Uhuru Kenyatta has said the Ewaso Ngiro Tannery and Leather factory put up by the Jubilee administration, iwill improve the lives of Narok people.

“Once Raila ascends to power, he will come to commission this project, which is the largest in the region,” he said.

He praised the government for constructing the Narok-Sekenani road that has improved the tourism sector and the Narok-Mau Narok that has made it easy for the people of Narok and neighbouring counties to engage in business.

“Narok is also known to be the largest wheat and barley producer in the country and there is a need to sell the goods in finished products and that will spur the development in the region,” Ngatia said.

Raila, the former prime minister, has promised to fix the economy if he ascends to power.

Raila said that he is ready to stabilise the economy after sealing all corruption loopholes.

“Kenyans have been losing a lot of money through dubious corruption deals and that should change in the next administration,” Raila said.

On Thursday, the Azimio team made stops in Elburgon, Njoro, Kisulisuli and pitched a tent at Nakuru town.
InPictures
2 weeks ago

Pledges to improve road networks to open up the area for massive economic takeoff.
News
1 month ago

Programme will accelerate the Vision 2030 linkage through inclusive industrial development, leaving no one behind.
Counties
1 month ago
“WATCH: The latest videos from the Star”
by KIPLANGAT KIRUI Correspondent
Elections 2022
01 August 2022 - 23:00
Read The E-Paper