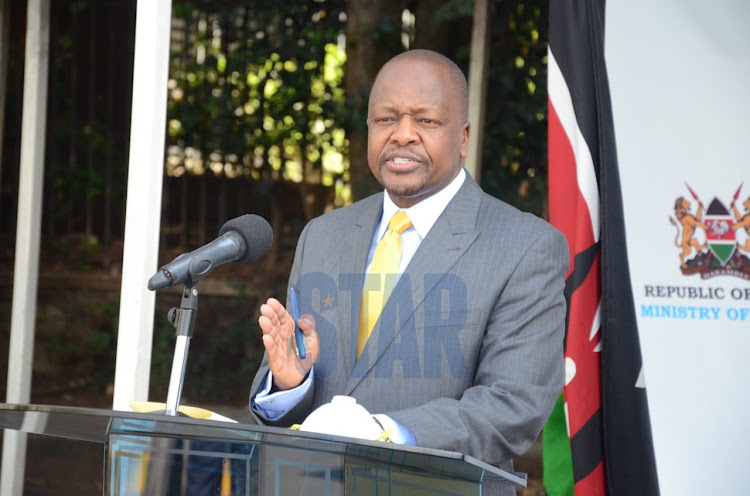 Health CS Mutahi Kagwe has announced 29 new Covid-19 cases, pushing the total number of patients past the 100 mark to 110.

Out of this, 28 are Kenyans, while one is Congolese.

In the last 24 hours, the government tested 662 samples, out of which the 29 people tested positive.

Kagwe said mass testing for the 2,050 quarantined individuals is ongoing.

During his daily briefing on Thursday, the CS also announced the death of two more Covid-19 patients.

This brings the total number of deaths to three.

The first patient to die last Thursday was a businessman. Morris Namiinda, 66, had a pre-existing condition - diabetes.

One of the new deaths reported on Thursday was of a Kenya Ports Authority employee.

The woman, 58, was buried at Mbaraki Cemetery on Thursday.

CS Kagwe on Thursday banned travel upcountry to contain spread of the disease.

He said those intending to travel for Easter or to visit their relatives should shelve the plans.

Kagwe said Kenyans should get used to staying where they currently are.

The CS also hit out at skeptics who had cast doubt on the two Kenyans who fully recovered from Covid-19.

"It is unpalatable for anyone to trivialise the life of Kenyans," he said.

Brenda Cherotich and Brian Orinda shared their stories of conquering the dieseas on Wednesday.

The CS said that government would not use innocent Kenyans to try and conduct a "PR exercise" on the state of Covid-19.

"I'm deeply saddened that a section on Kenyans have taken to social media to make a mockery of some of these measures," he said.

Kagwe urged the authorities to act against those trolling Brenda and Brian.

Cherotich, speaking during an interview with Citizen TV's JKL show on Wednesday, said she first suspected she might have Covid-19 after getting a 'weird' cough.

Having travelled from the US, through London and to Kenya, Cherotich contacted other passengers on the plane she had travelled on and one woman said she had a 'weird' cough as well.

This made Cheortich go to Mbagathi Hospital.

After 23 days in isolation, Brenda has her life back.
Coronavirus
2 years ago

On Wednesday, Cherotich returned to her home in Rongai, and says she was greeted with positivity.

"When the hospital staff took me there, the guard asked them if they were bringing someone sick and when they said no, I was welcomed," Cherotich says.

Post a comment
WATCH: The latest videos from the Star
by CLAIRE MUNDE Digital Sub-editor
Coronavirus
02 April 2020 - 15:33
Read The E-Paper