Governor tells community to avoid gambling with the country’s leadership; says life will be better with ODM leader at the helm

• Oparanya says Raila is the only leader who can revive the economy that is in shambles. Azimio flagbearer Raila Odinga is the only presidential candidate who can transform the country, Kakamega Governor Wycliffe Oparanya has said.

He said Raila is a reformist and Kenyans should give him a chance to prove his worth.

Oparanya spoke during a campaign rally at Mwamba market in Lugari constituency on Saturday.

“I know that life will be better if Raila takes power in August. He is the only leader who can revive the economy that is in shambles,” he said.

Oparanya asked Luhyas to avoid gambling with the country’s leadership and vote for Raila to be in the next government.

“We are confident that with the women behind Baba [Raila], he will win the race in the morning and Kakamega will deliver votes to him 100 per cent,” he said.

He said there was nothing for Mudavadi and Wetang'ula in the Kenya Kwanza formation should the alliance win next month.

“Ruto has released his line-up. If his camp wins he will be president, Rigathi Gachagua his deputy and Senator Kindiki Kithure chief minister. What positions will Mudavadi and Wetang'ula get?" Savula posed.

"If Wetang'ula is serious that he would become the National Assembly Speaker, why is he running for Bungoma senator seat?”

Ikolomani MP Bernard Shinali said Luhyas should elect Raila because he has a practical manifesto.

“Raila has promised free ECDE, primary, secondary and university education, free healthcare and establishment of factories. Let us support him so our collapsed factories like Mumias and Pan Paper can be revived to offer jobs to our youths,” he said.

The battle for control of the more than 2.5 million votes in Luhya-dominated counties between Azimio One Kenya and Kenya Kwanza has intensified, with each camp trying to outdo each other.

Oparanya is leading the Azimio campaign in the region for Raila, while the Deputy President's campaigns are headed by Mudavadi and Wetang'ula.

Kakamega is the epicentre of Luhya politics and its control is critical to those seeking the presidency. 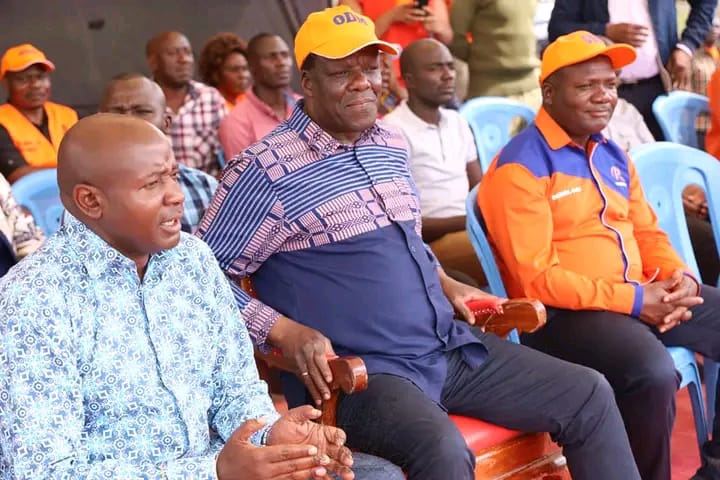 Oparanya who attended the rally said Western region will back Raila
News
1 month ago
“WATCH: The latest videos from the Star”
by HILTON OTENYO Correspondent, Western Region
Western
03 July 2022 - 22:00
Read The E-Paper