• ADC Trans Nzoia regional manager Edward Ojode told the Star they have exhausted manure at their farms due to high demand from farmers. 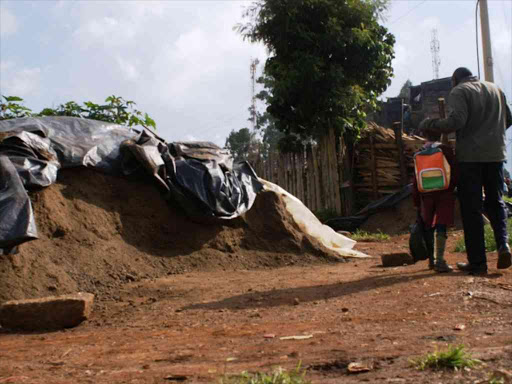 A pile of manure collected from Maasai land waits to be traded in a town centre in one of Nairobi’s fringe counties, May 12, 2017.
Image: /REUTERS

Farmers in Trans Nzoia have turned to cow dung as fertiliser prices  skyrocket out of their reach.

Agricultural experts in the county have warned that the high cost of inputs could worsen food insecurity and have urged the government to provide subsidies.

They said the high cost of fertiliser has pushed many farmers, both large and small scale, into using dry cow dung.

Agronomist Martin Ngomat said on Tuesday it was unfortunate that the country is still grappling with food insecurity more than 58 years after Independence.

"Prices of all farm inputs in the country have surged by more than 100 per cent in the last three months," he said.

Ngomat, who spoke to the Star in Kitale, said the suffering of Kenyans is getting worse each day as food prices increase.

He said most Kenyan households cannot afford tomatoes, rice, beans, and other staple foods due to the high prices of food.

"The prices of seeds, fertilisers, herbicides, pesticides and animal feed are high as a result of cartels running the show in the country despite Agriculture CS Peter Munya acting tough," he said.

Ngomat asked President Uhuru Kenyatta to intervene so that the prices of farm inputs can be reduced.

"The fact that most farmers have reverted to using cow manure instead of commercial fertilisers such as DAP should be something to worry about," he said.

A spot check by the Star in Kitale established that a 50kg bag of DAP is retailing at between Sh6,500 and Sh7,000. The amount is too high for most farmers.

"Growth in the agricultural sector is slowing down and may put us into a fix if the President does not intervene and save struggling Kenyans," Ngomat said.

The Star established that several farmers are flocking to Agricultural Development Corporation farms in Endebess subcounty to purchase cow dung as the planting season continues.

ADC Trans Nzoia regional manager Edward Ojode told the Star they have exhausted manure at their farms due to high demand from farmers.

"Although ADC has a large number of animals, the manure is exhausted, with the little we have is being used in our orchards," he said.

Most farmers interviewed by the Star said they were disappointed that there was no manure at ADC.

“I came all the way from Cherangany to buy manure for planting since I cannot afford commercial fertiliser," farmer Moses Sichangi said.

He said he is yet to sell the maize he harvested last season to buy inputs.

Sichangi said he used to harvest between 10 and 15 bags of maize from an acre but since he started using organic manure the yield increased to 25  bags per acre.

Food ​​insecurity was one of the four challenges Jubilee leaders had promised to tackle when they campaigned for the 2013 and 2017 elections.

A 50kg bag of fertiliser is currently selling at Sh6,000 from Sh3,000 the same period last year
News
4 months ago