DP says the city is where leaders unveil their political journeys 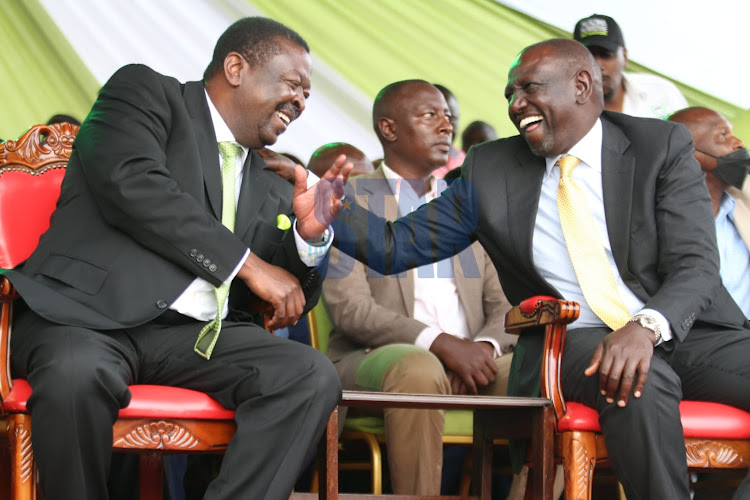 The rally brought together Ruto, Musalia Mudavadi and Ford Kenya leader Moses Wetang'ula, among other leaders for a first joint campaign.

The gathering saw the party leaders declare that they will work together to emancipate Kenya from the shackles of poverty and debt crises.

According to Ruto, Nakuru is a place for peace and prayers, and where leaders unveil their political journeys.

"It is you, Nakuru people, who brought us together and said Kenya will have peace and we have enjoyed peace since then. We made a promise here with President Uhuru Kenyatta, and I want to declare that's where were are as UDA," Ruto said.

This was echoed by Garissa Town MP Aden Duale. He said Nakuru is a place that helps predict the next president and that person will emerge from the leaders who were in Nakuru.

"It not about power sharing but restoring Kenya to its former glory where all Kenyans will live together in harmony," Duale added.

"Nakuru is the starting point of politics in Kenya and every time politics starts here in Nakuru, it must succeed. We have started here and we will succeed to State House," Mathira MP Rigathi Gachagua said.

Local politics also played a big part in the rally, with Senator Susan Kihika endorsed to run for the governor seat to dethrone the incumbent, Lee Kinyanjui.

However, among the surprise entrants in Nakuru politics include Keroche CEO Tabitha Karanja who has declared an interest in Nakuru senatorial seat.

This is after she officially joined the United Democratic Alliance in Nakuru.

The Keroche boss had declared she would contest for seat in last year, but failed to mention which political vehicle she would use.

"I am seeking to contest for Nakuru senator seat to make sure that laws that are  made in the Parliament are not discriminatory to business people," Tabitha said.

"After looking at the economic model being proposed by the Deputy President Ruto, I have realised that his economic model is the one I have been practising for the more than 10 years."

She was welcomed by Ruto to the party who assured her of his support.

Vernacular radio presenter Njogu wa Njoroge was also welcomed to UDA and will vie for Njoro parliamentary seat after dropping his bid for senator seat.