•Ojaamong, who is widely supported, is backng his deputy to succeed him. 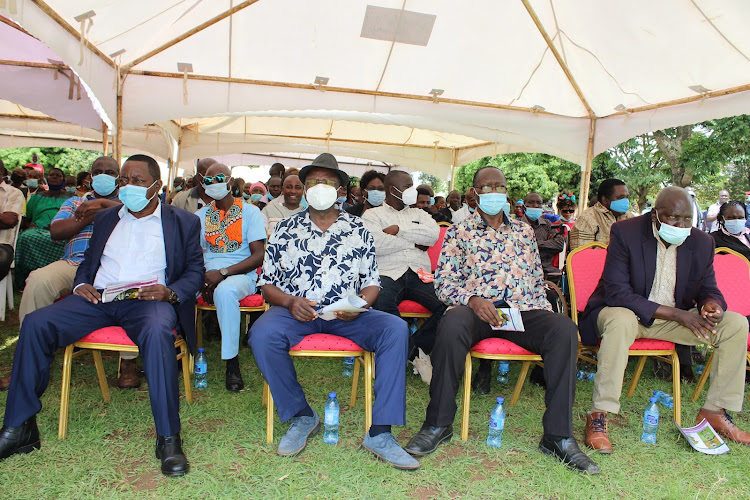 Leaders from Busia at a function in Butula
Image: KNA

A fierce battle for the ODM Busia gubernatorial flagbearer is shaping up, as five political bigwigs compete to succeed exiting incumbent Sospeter Ojaamong.

The winner is likely to determine the future of  Busia politics.

Key allies to ODM leader Raila Odinga will be seeking his endorsement for the position, even after Ojaamong declared his support for Deputy Governor Moses Mulomi as his successor.

"I have worked with my deputy since 2017 and his tolerance and dedication to duty is second to none. I am declaring today, it's Mulomi all the way to becoming the second governor of Busia county," he said.

ODM will be facing off with ANC candidate John Sakwa Bunyasi and Eng Vincent Sidai of Ford Kenya.

Ethnicity and tribal backing is a key factor in Busia’s political culture and usually determines how elections are conducted.

"We agreed that Ojaamong be elected as governor from Teso, then the Luhya side produced the deputy. We now want the Tesos to produce the deputy and Luhyas to have the governor,” Matayos MP Geoffrey Odanga said.

Florence Mutua, head of the education department, played a pivotal role in ODM party politics in Busia county and the Western region.

Ojaamong's support of his deputy is likely to bring tension in the party, since Ojaamong commands manysupporters in Busia and he pledged to ensure he leaves the county in the right hands.

Expressing his trust and confidence in his deputy, the governor stated  Mulomi possesses good leadership skills that will be able to transform development.

He described his deputy as a person of integrity, who dislikes violence but adopts peace and unity, a person who is not biased for or against any tribe and has a clean record.