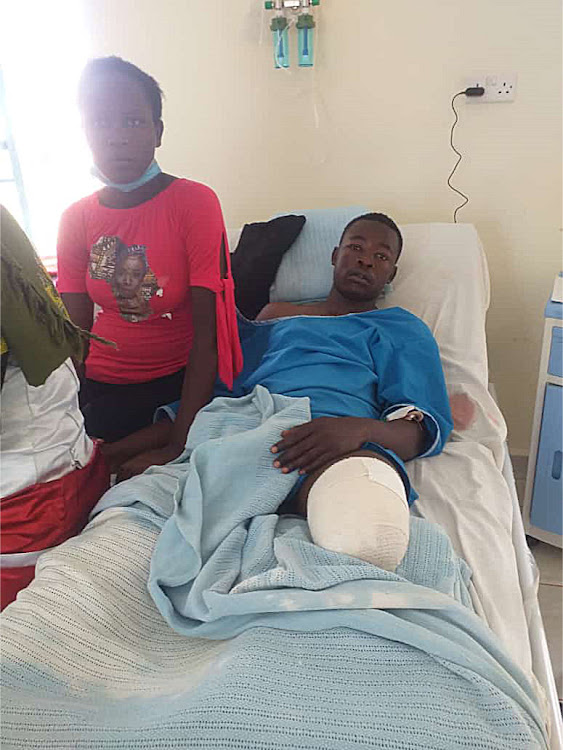 A debt has cost a man his left leg in Kakamega county.

Duncan Kakai, 25, was grabbed by unknown assailants from his home in Ingavira village,  Malava, on Tuesday night and taken to a nearby river.

His father Mzee Levi Kakai said his son called him at 8pm telling him that he had been abducted by a man demanding payment for some work done.

“I was surprised because I had not assigned anybody to do any work for me," he said.

The call was then disconnected.

Frantic, Mzee Levi tried to call back with no success.

"I sensed danger and called a relative near that place to go and check what was happening. After a few minutes I received a call that my son had been found with his leg chopped off. Luckily his life was spared,” Mzee Levi said.

Duncan was taken to Mukumu Mission Hospital in Kakamega.

Area chief Vitalis Otisa confirmed that the victim was snatched from his home at night and taken to a river a few metres away where his left leg was severed at the knee joint.

“It’s sad that such a thing has happened, but we are sounding a warning and assuring that the culprits will be pursued until they are brought to book," he said.

"Right now we don’t know who did this, but the matter is with the police who have launched an investigation and we believe, with the help of wananchi, they will unmask the assailants.”

Otisa urged residents to be calm and await the outcome of the investigation.

The shocked family is making arrangements to bury the severed limb.

The incident has sent shockwaves across the village and its neighbours. Residents have urged the government to beef up security.