I can't breathe, Bungoma woman with growth cries out for help

• Makokha is now appealing for financial help to seek specialised treatment. She has resorted to taking painkillers to ease her suffering.

• She appealed to well-wishers to come to her rescue. She says she has not given up on finding a medical solution to her condition. She is the sole breadwinner for her family. 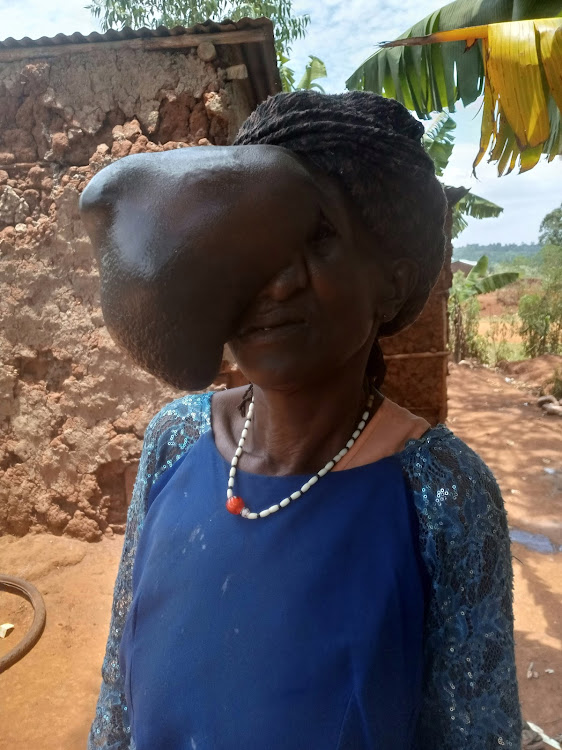 Beatrice Makokha during an interview at her home in Stabicha in Kimilili, Bungoma county
Image: IRENE OKERE/KNA

When Beatrice Makokha felt a mild pain on the right side of her head, she brushed it off as a mere headache.

That was 21 years ago. Today, the pain has morphed into a serious growth that has covered virtually her face.

Her breathing has been severely hampered.

Makokha says the niggling pain began back in January 2000. What was a mild pain just above the eye has since worsened and covered even the nostril.

The pain grew with each passing day.

“It felt like my eye was being stabbed with a knife and I just couldn’t stop rubbing it. The rubbing would slowly get intense and vigorous until my eye turned red," Makokha told the Star during an interview at her home in Stabicha in Kimilili, Bungoma county.

When the swelling persisted, she decided to go to Kitale Referral Hospital. Doctors found no problem with the eye and only advised that she take painkillers.

"The scan showed that nothing was wrong with my eye and head, so the doctors prescribed painkillers for the perceived migraine,” she said.

Makokha did not go to MTRH. She cited lack of money.

Before this misfortune, Makokha says she had given birth to 14 children. Eight have since died.

"Right now, the swelling has grown so huge that I can't breathe with ease. It has covered my right nostril," she says.

Makokha is now appealing for financial help to seek specialised treatment. She has resorted to taking painkillers to ease her suffering.

She appealed to well-wishers to come to her rescue. She says she has not given up on finding a medical solution to her condition. She is the sole breadwinner for her family.

Beatrice is a paragon of stoicism. She has withstood pain with unflinching courage for years.

The slight fleeting pain that has morphed into a grotesque malignant lump and which has stolen her beauty started 20 years ago. She was then 30. Young, energetic and full of hope. She dreamt of a prosperous future.

Twenty years of silent agony and endless prayer would have in many people bred complacency. A feeling that it is the hand of fate.

But Beatrice has never given up. She believes that someone out there can put an end to her pain. Someone out here can get the tumour out of her face.

Someone out there can give her a smile back. You can reach out and help through Namalwa Jenty on 0705331763.