'I am in ODM and Baba (Raila) is our father', lawmaker says amid cheers

• Omuse has in recent weeks been cosying up to Ruto's camp but his loyalty was tested on Sunday when Raila dared him to declare his stance.

• Raila had taken his BBI message to Busia county where he attended a service at Lwanya Catholic Church in Matayos. 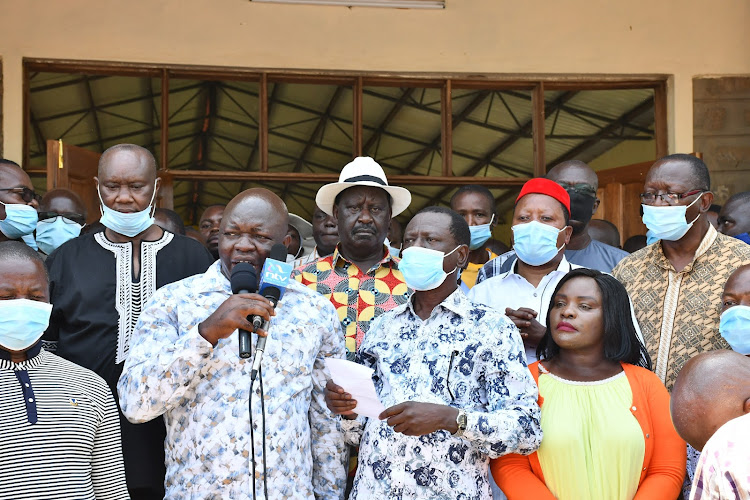 Omuse has in recent weeks been cosying up to Ruto's camp but his loyalty was tested on Sunday when Raila dared him to declare his stance.

Raila had taken his BBI message to Busia county where he attended a service at Lwanya Catholic Church in Matayos. After the service, Busia leaders and others who had accompanied Raila addressed hundreds of residents.

He said out of the four counties constituting the former Western province, only Busia had not received a new constituency.

“We are very happy to welcome you (Raila) to Busia. This county is with you and we want you to move with us together. Among the counties that form Western, it is only Busia that has not been given a new constituency. I request you to give us two more constituencies; one for the Luhyas and one for the Teso community,” Omuse said.

When Raila spoke shortly before noon, he questioned Omuse's loyalty to his party.

Omuse was allowed to return to the podium and make a few remarks.

“I am in ODM and Baba (Raila) is our father. I am not in Tangatanga,” he said as the crowd cheered.

Raila said the lawmaker's proposal for a new constituency was good although it had come at the wrong time.

“The proposal that you have made has delayed being published.

“However, here in Busia, Teso South constituency will be divided to create two constituencies,” Raila said.

A first-term MP, Omuse represents Teso South and is expected to face stiff opposition in his bid to recapture the seat in 2022.

Sources say Governor Sospeter Ojaamong is eyeing a parliamentary seat and may contest in 2022 in Teso South, his home constituency. Former MP Mary Emase is also said to be angling to recapture the seat she lost to Omuse in 2017.

Raila’s decision to ‘award’ an extra constituency to Busia, specifically Teso, was interpreted by many as bait to lure Omuse back to ODM after his long association with Ruto.

Ahead of Raila’s Sunday visit, Ojaamong had told local leaders to unite and agitate for the creation of one constituency for the county.

Ojaamong on February 26 said Busia deserved a new constituency for its support for BBI and the ODM leader.

“The Building Bridges Constitutional (Amendment) Bill 2020 has created 70 new constituencies, but Busia is not among the beneficiaries of the initiative,” Ojaamong said during a funeral in Teso South.

“If our party leader will give a nod to our proposal we shall say thank you to God.”

The leaders were unanimous they will support the BBI Bill at the referendum as the initiative will channel more funds to the counties and wards.

Raila also held a meeting with local leaders and ODM delegates before he addressed a rally at Busia Park.