• Herbert Nanzushi, the father to the quintuplets, won't bid farewell to his children lest he also dies. 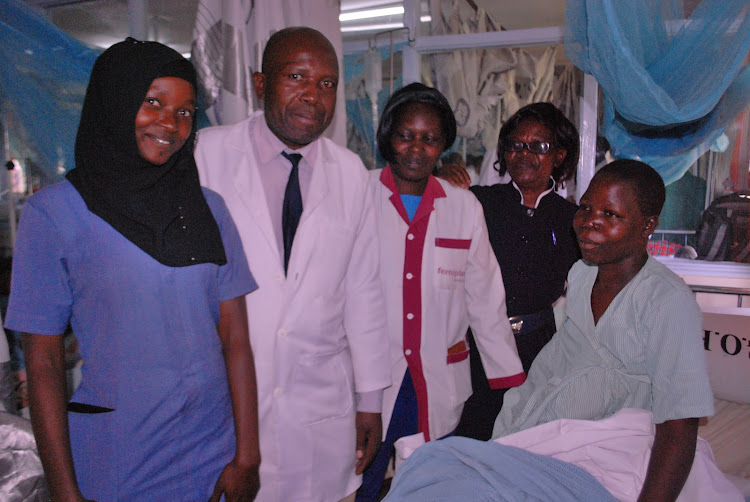 Luhya elders say a number of cultural rites must be performed to forestall calamities when mother of quintuplets Everlyne Namukhula is buried in Kakamega on Wednesday.

When Namukhula, 28, gave birth on March 12, the delivery sparked a debate on whether all the five children should live or some should be killed according to Luhya traditions. Two of the babies died of complications.

The elders are not taking chances and will ensure their customs and traditions are followed to the letter.

Herbert Nanzushi, the father of the quintuplets, has not been allowed and will not be allowed to see the bodies of his children. It is believed that Nanzushi, who is a surviving twin, might die if he is allowed to view the children's grave.

He can only visit the grave after the grass has grown on it and it is covered with a blanket. Nanzushi, 38, is jobless and has a speech defect.

The 70-year-old man said the remaining three children must not be in the compound during their twin brothers’ burial, lest they also die.

Namukhula has four other children, including twins
News
3 years ago

“Even if the twins were grown-ups, they would not be allowed to see the graves of their departed brothers. It is believed that they would also die if they viewed or even knew their dead siblings are buried,” he said.

Namukhula was to be buried today but that was postponed to Wednesday so that the county government can complete the construction of a house for the family.

A member of the funeral committee appointed by Kakamega Governor Wycliffe Oparanya said the road to the home would be graded.  Robert Makhanu said this is part of the reasons for the delay of the burial that would be held near the banks of River Nzoia.

Namukhula delivered two boys and three girls each at an interval of five minutes.

Three of the newborns weighed 1.5kg each at birth; another weighed 1.4kg and the last 900 grams.

In both communities, it is a bad omen to have twins as the firstborns. Traditionally,  the midwife suffocated the second child and made it appear as a stillbirth. alternatively, both babies were abandoned in the forest for animals to feast on them.

This has changed. Some communities now give twins a concoction  of herbs to "admit the twins in the society without negative effects."

Quintuplets' mum to be buried Saturday

She said she has seen dozens of twins born in her family who were left to live. The name Shisia means a child born after twins or one of the two twins who came out last.

“One elder came over here to wish us well and made a suggestion that three of the children be killed as per the traditions but I’ll not allow anyone to harm my grandchildren,” she said.

"We’re not from his clan. I appeal to the government to protect my family," she said.

Asked about the culture of killing twins among the Banyala, Jeremiah Okova, 66, said the community celebrated children but had an answer to every mystery.

He said that though, in the past both twins were not allowed to grow up, the community has since discovered concoctions that are administered to them to allow them to live like any other child.

“Why would they kill if they could prepare a concoction of herbs to remedy the situation?” he asked.

Chimasia said that the herbs concoction was administered by elders to exorcise a supposed curse in the home and cleanse the midwife from a skin disorder - vitiligo - which is believed to be a direct result of the contact with twins.