Tata Chemicals Magadi has come to the rescue of residents affected by drought in Kajiado by providing food and water to communities around it.

It is targeting 400 homesteads and 2,000 children in ECD centres in primary schools in Magadi.

The ongoing drought has severely impacted human lives and livestock that are central to the wealth and nutrition of the communities across Magadi, Kajiado.

There are four group ranches around the multinational’s soda ash mining plant in Oldonyonyokie, Shompole, Olkiramatian, and Olkeri that entirely depend on Tata Chemicals for feed relief and freshwater.

The company initiated several other humanitarian measures toward saving lives in the community by waiving medical fees for pregnant women, lactating mothers, and children under 5 seeking medical attention at the company’s hospital.

Speaking during the exercise, the company’s MD and CEO Subodh Srivastav, said the company has also increased the supply of water to the Magadi ward community.

“We have increased the number of trips made by rail tanks supplying water to the people living along the railway line between Magadi and Kajiado and company-owned water bowsers supplying the local community and those living along Magadi road,” Srivastav said.

The community leaders expressed their appreciation for the support received from the company during the current difficult time.

Srivastav said the local community and Tata are just like a family, which shares in times of need and celebrations.

He assured the women that the company stands with them, and that this was just part of the journey to help them mitigate the effects of the drought, promising that the company will continue to do more for them.

“The community is truly grateful for the support the company is offering the people here in Magadi over the years and particularly now that we are experiencing tough times and suffering from the effects of the biting drought,” senior chief Joel ole Saiyanka said.

“I cannot imagine what we would be experiencing now if the company had not come out to support the families, especially the women and young children who have also benefited from free medical treatment offered by the company.”

He said the provision of food and water has enabled the families remain healthy. 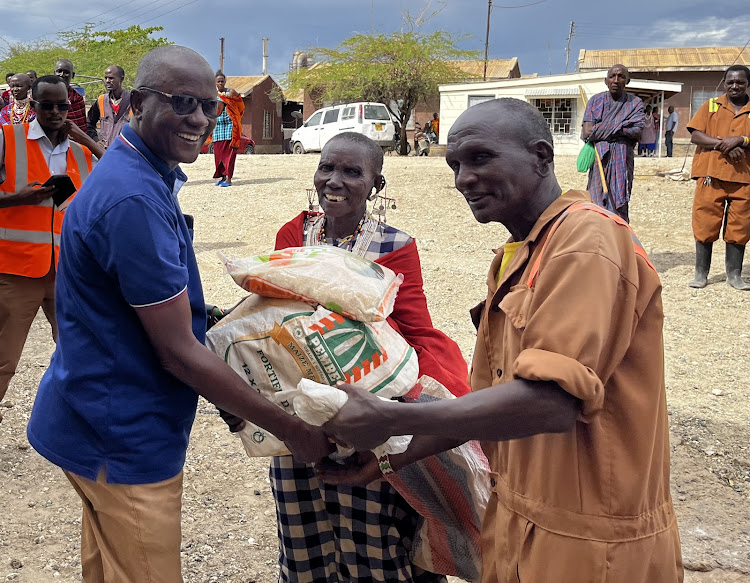 Zebras, wildebeest and giraffes are visiting homes for water where they risk being killed.
Counties
6 days ago

Over 150,000 people have ben affected  and are appealing for humanitarian support
News
1 week ago

The funds will help with the provision of relief food and water trucking to the most affected areas.
Counties
1 week ago
Post a comment
WATCH: The latest videos from the Star
by KURGAT MARINDANY Correspondent
Rift Valley
19 November 2022 - 18:34
Read The E-Paper